Meet Lori McCarthy, a Newfoundlander right to the core. Born in September of 1977, Lori was raised with four siblings in Bauline (population less than 300) by parents, Shirley and Bill Butler (her dad: teacher and fisherman; her mom, best cook ever of “rough grub.”)

Lori explains, “Mom’s rough grub included soups started with roasted bones, bread made up the night before giving it time to develop beautiful flavours, and serious Christmas cakes. And she can put a taste on a Jiggs dinner like no other.” But the road leading from her mom’s kitchen and her dad’s fresh catch of the day to the unusual and highly successful business she now operates—featuring liberal doses of “rough grub”—was full of interesting twists and turns.

Coming into her 20s, Lori had some major fears to conquer—including fear of the water. “Well, that’s just silly,” says the young entrepreneur, “and living on an island with a life steeped in the sea, I was determined to get over it.” She took a job on a tour boat; then became a kayak guide; followed by becoming a PADI-certified scuba diver.

In the fall of 2004, needing work after the tourist season came to a halt, Lori walked into a restaurant that was about to open in St. John’s. “I had no previous restaurant experience but I could bake bread.” She landed a job in the kitchen of Blue on Water, although she admits not knowing the difference between margarine and butter at the time. Being a quick study, she eventually ended up managing the kitchen there. The restaurant was owned by ground-breaking chef Jason Brake. “This experience showed me the world of food on level I didn’t know existed.”

About four years later, she started The Island Chef—a catering business—whereby she and her mom became “cooking machines, feeding families real food.” Lori packed it in when she was eight months pregnant for her first-born. While nursing her baby, she devoured magazines and books about what was happening globally with chefs and restaurants. Terms like “local,” “wild,” and “pride of place” were becoming synonymous—and sexy.

In the spring of 2011, Lori drove to a bog, picked a load of cattails, then knocked on the back door of Raymonds (a 5-star restaurant in the city) and asked chef Jeremy Charles, “Would you have any use for these?” His response was, “Yes! How much of this stuff can you get?” She foraged for the restaurant almost every day. “They had chefs from around the world with knowledge of wild plants; I had the land and shore around me. So it became a beautiful learning experience between the chefs and me.” They showed her photos of plants and asked if she could source them. Indeed she could.

Lori read books about nature and traditional cooking. She talked with her parents and old-timers. She read some more. Before long, the self-taught field naturalist became familiar with weather patterns, where wild plants grew, how and when to harvest. “I felt a connection to my grandfathers and my dad. I discovered how Newfoundlanders lived with the sea—in all its savagery and beauty. It’s what knits us together and makes us who we are today.”

Fast forward to 2014. Over a cup of tea, Lori told her mom that she wanted to combine what she experienced growing up with her new-found knowledge, and share that with others. “Imagine if people could experience picking berries, boiling up on the fire, having a cuppa tea and eating fish stew, homemade tea buns and fresh jam,” she mused. “We are generations of hunters, gatherers, trappers, sealers, fishermen—and we have some of the best food, traditions and culture in the world.” She would take people foraging and to the shore, so they could experience these things first-hand.

Today, Lori operates Cod Sounds—a company that provides locals and visitors with unique Newfoundland experiences. “I want people to hear and taste how the food came to be, from where it began, and where it is going.” How does she do this? By providing various workshops such as Bushcraft Basics, Fireside Cookery, Fur & Feathers, and On The Hunt—to name just a few. Participants can pick up a few skills, learn about Newfoundland culture and tradition, and feast on the best the land has to offer.

I had the pleasure of foraging with Lori last winter. It was a double treat as her colleague and friend, Felicity Roberts—an authority on lichens—joined us. In sub-zero weather, we headed to the wee village of Quidi Vidi and hiked up Sugar Loaf Trail where we picked sweet gale and tiny alder buds, which we later ground to season homemade salt back at Lori’s workshop/studio.

“This trail grows a wild abundance of berries, and all fall you can see all hands ‘arse up’ picking wild blueberries, partridge berries, crowberries—you name it—all kinds of berries,” said Lori. We also harvested fir tree needles which Lori later added to a mix of dried summer-foraged herbs for tea. As we meandered along the trail, Felicity showed us different lichens including one called “crottles” or “mollyfodge” in the Newfoundland Dictionary of English. Crottles are easy to find on fallen branches; they produce various dyes ranging from peach to bright yellow and deep rust.

Back at Lori’s, we warmed up with teas and Nan’s traditional tea buns smeared with partridge berry jam while she prepared cod chowder made the old-fashioned way (no milk). Felicity boiled a brew of lichens which eventually turned a skein of raw wool into a rusty bumble-bee colour.

They often partner up for excursions. Felicity says, “Our combined skills enrich each others’ understanding of what is possible with our local resources. Lori prepares foods involving seaweeds, mushrooms and lichens while I dye wool with them and study their folklore and medicinal properties. We have a lot of fun doing it, too.”

We were then treated to strips of sizzling moose graced with alder tips and Labrador tea. As we enjoyed our final morsels of moose, Lori’s mom entered the room with hand-pulled taffy she had made with her grandchildren.

Be sure to ask Lori where she came up with the name Cod Sounds for her business. It’s a delightful tale. If you’re lucky, you may be offered some to eat.

Intro caption: Lori McCarthy pauses for a moment while foraging in Quidi Vidi. 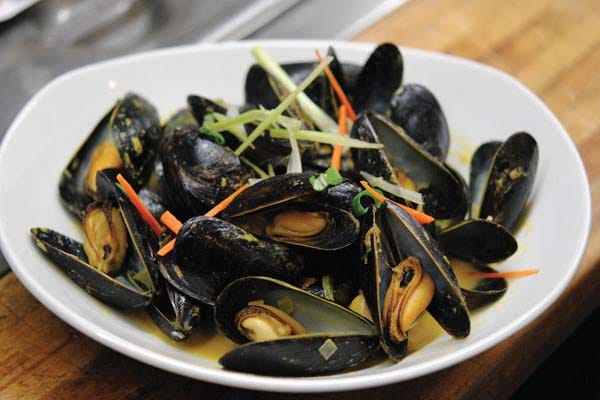 Often, when I think of Prince Edward Island, I start humming the tune to “Food, Glorious Food,” from the musical, Oliver! Then I start fantasizing about what’s in store during the Island’s annual... 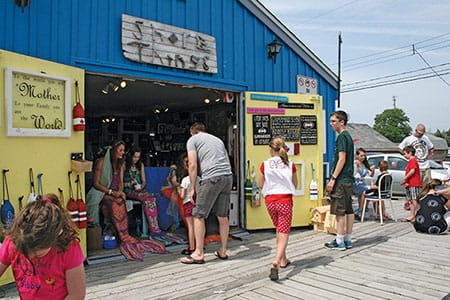 Halifax has a number of attractions that every first time visitor should not miss. These include walking the boardwalk along the waterfront, visiting a popular National Historic Site, the Halifax...