Story and photography by Darcy Rhyno

The hardest thing about cooking isn’t actually doing it,” says chef Mike Bradley. “It’s getting started.” Before him on the counter are plump chicken breasts from a local, organic farm, local garlic and onions, a jar of honey and sprigs of fresh herbs from the kitchen garden just outside the door. That honey is special to me and to the other cooking class participants here at The Table Culinary Studio in rural Prince Edward Island because we just gathered it from the hives of a local producer.

The Table was previously known as Annie’s Table, named for Annie Leroux who transformed this, the former New London United Church built in 1953, into a successful culinary workshop. At the time, Leroux lived across the street in a Victorian home where Lucy Maud Montgomery—creator of Anne of Green Gables—was born. A few years ago, chef Derek Hoare took it over, charmed by the pastoral setting, the idea of grand gatherings around a communal table and the building itself with its high ceilings, exposed wooden trusses and natural light, streaming through stained glass windows.

Earlier, when we piled into Hoare’s truck to head for the honey producer, he talked about getting to know the island’s foods through his own hands-on experiences like working the oyster farms and lobster boats, pulling garlic and cleaning eel nets. Some of these experiences led to the creation of The Table’s themed cooking lessons like Oyster Obsession, Spudtastic and Bounty of the Sea.

We trundle down small roads until Hoare turns on to a dirt driveway flanked by dense, Acadian forest, which opens onto a small clearing with a large, tidy fenced garden before a rustic, back-to-the-land house. Beekeeper Sharon Labchuk welcomes us, then introduces us to her bees, which she’s been keeping for 20 years, in three wooden hives next to the garden.

As Labchuk pulls on protective white overalls, gloves and a mesh veil, she prefaces our honey lesson by explaining how today’s overcast weather will affect the bees’ behaviour. “Bees have good days and bad. On a rainy day, you wouldn’t think about going near the hive. They’re all in there and in a bad mood. Today is an in between day, so I’m pretty sure you’re not going to get stung.” I decide pretty sure is sure enough and accept her invitation to don a bee suit to pull a lid off a hive.

Exposing thousands of bees at work, she explains how they collect honey to raise their young and survive the winter. Pulling out one of the 10 frames on which the bees build their honeycombs, Labchuk says of the sweet liquid inside, “It’s a balancing act, taking honey for yourself, leaving enough for the bees.” Before winter, she takes about 75 lbs. of honey from the hive and leaves as much for the bees.

When Labchuk offers us a sample of the honey, she calls our attention to its dark colour. “A lot in the store comes from clover, which produces clear honey. Buckwheat honey, which I love, is super dark brown. It’s really strong tasting. This honey is four years old. It’s like wine—the older the better.”

After the tasting, we head back to The Table with enough for the Honey Jalapeno Dressing we’re making for our salad. When we arrive, chef Bradley is well into preparing dessert—a rich pound cake with honey lavender syrup and homemade sponge toffee. After we whip up the salad dressing, Bradley walks us through the main course—Honey Mustard Chicken—punctuating it with his own story, which gives away his age.

“I’ve been cooking for 10 years, since I was 12.” There’s some good-hearted ribbing of the boy—everyone else in the room is older than Bradley, though he’s the one giving the cooking lessons—but he’s obviously a natural in the kitchen. He says of the Culinary Institute of Canada in Charlottetown, where the native islander learned the trade, “I’ve got one of the best schools in my back yard. It was a no-brainer.” Bradley worked his way up from apprentice to executive chef here at The Table.

To get the chicken started, Bradley directs us to chop fresh garlic, onions and bacon. “If you’re not using garlic at home, I recommend you start. Onions and garlic are the base aromatic for your food.”

We add the chicken breasts to sear them, then the cream, milk, mustard, honey and salt. “Meat is actually sweet, believe it or not,” says Bradley, “so you want to balance it with saltiness. Salt will bring out the flavours already in your food.” The chicken is finished with thyme, oregano and sage from the garden, which has the room singing with mouth-watering aromas.

The potatoes are done and ready for whipping with black garlic, a rare ingredient that’s so difficult to create, its secret is closely guarded by Al, the local farmer who took years to perfect its preparation. Bradley lets us in on the joke about Eureka Garlic, so named when Al came home from picking garlic all day, and his wife said, “You reek of garlic.”

Explaining the unique and complex flavour properties of black garlic, Bradley says, “Have you ever had a banana turn brown? It’s the same process. As the banana gets older, it gets sweeter as it caramelizes from the inside.”

Hoare adds, “It’s heated for 21 days in an old refrigerator Al has ‘MacGyvered’ up to turn into an oven. We put it in everything from black garlic potato loaf and infused pastas to sauces and a beetroot chocolate cake with black garlic chocolate ganache. We’re experimenting with black garlic ice cream.”

When chef Bradley said at the beginning of our cooking lesson that getting started is the hardest thing about cooking, he was talking about what most of us do at home—find a recipe, then shop for the ingredients.

“When starting with a recipe,” says Bradley, “You’re basing your food off a recipe instead of the ingredients.” He steps away from the counter, indicating that we can now plate our dinners. “What we like to do here is base our recipes off our ingredients.” After cooking for a day with Bradley in this former church—then, as now, a heavenly gathering place—and tucking into his delicious honey chicken dish with black garlic whipped potatoes and honey butter carrots, I’m ready with an amen when he adds, “Your flavours are going to be so much better if you can cook locally and base your recipes around seasonal ingredients.”

Render diced bacon in pan until crispy, remove from pan.

Sauté onions and garlic in bacon fat until fragrant.

Sear chicken in pan on both sides.

Pour in cream. Add milk until chicken is just submerged.

Add in crisp bacon and herbs. Bring to a simmer and let cook for 20-40 minutes or until chicken reads a temperature of 165°F. 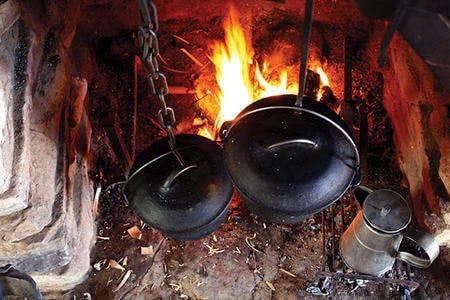 “If you come to my house, you can look in my fridge for something to eat.” This is not an invitation. While I have no doubt Irene Maillet-Belley wouldn’t mind a bit if I walked into her kitchen and... 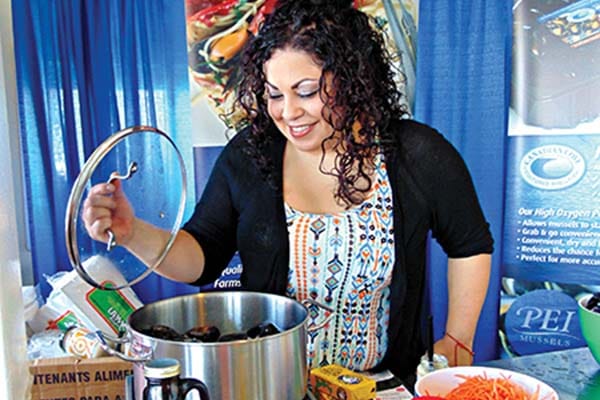 As you leave the long sandy beaches of Nova Scotia and head out into the waters of the Northumberland Strait you hear the cry of the gulls wheeling overhead; the water sparkles and the sun is warm... 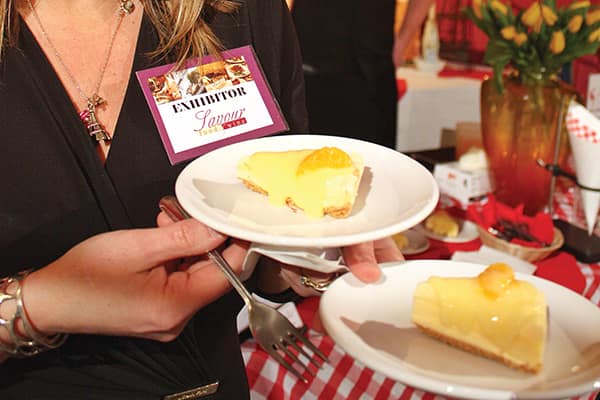 Miles is proudly posing before a sign that reads “Beef n’ Blues” in his “Meatatarian” t-shirt. He’s my son, a teenager who has never followed the crowd. While his friends are either junk food...