It all began with a broken furnace.

In 1994, Don Miller needed a new furnace for his home in Amherst, NS, and had to figure out a way to pay for it. While visiting his father in Bedford, he showed off a handmade birdhouse he’d bought in Mahone Bay. When his father saw the price tag, he dragged Don down to the basement, insisting Don could make that himself.

“I insisted that I couldn’t,” Don says. “I’m asthmatic, never did woodworking in school.”

When his father persisted in showing Don how easy it was to build a simple birdhouse, Don thought perhaps this was a perfect opportunity to do something with his father.

“But Dad struggled,” Don admits with a chuckle. “He lasted about a week because while he was making a birdhouse all beautiful, I was taking a hammer and trying to make it look old.”

Right from the start, Don’s vision for his birdhouses was to take the simple birdhouse and sass it up using found materials—cutlery and piano keys, knobs off drawers and spindles from bannisters, hinges and horseshoes, lots of knick-knacks, and even a stethoscope. He used old doors, chairs, bureaus, and boards. He loved the idea of reusing and recycling in order to reduce the amount of waste going to the dump.

“It was important to me environmentally, but I also liked the look of it.”

One hundred birdhouses, and one new furnace, later, Don thought he’d had enough of making birdhouses but people kept asking for more.

“A woman asked for a Nova Scotia-themed bird house to take to Florida,” he says. “I hadn’t made a bird house in two years, but she told me it would really mean something to her, so I started again, and I love doing it.

Twenty-five years later, Don is still coming up with uniquely themed birdhouses that he sells through Maritime Mosaic in downtown Amherst (his father says he can’t imagine who is left in Cumberland County to buy them).

“They’ve evolved over the years,” says Don. “I don’t know if I get tired of doing the same thing over and over again, or I just like expanding.”

His themes have included everything from fishing and hunting to owls and teacups. Some of his birdhouses are shaped like lighthouses. He designs for Christmas and Halloween, and has created two different villages.

He doesn’t need to buy any of his materials; he scrounges them or finds them sitting in his driveway, donated by friends and fans.

“The junk pickup week during the spring was the most exciting time of my life. I loved it!” says Don, who has been the minister of Christian Education at the First Baptist Church in downtown Amherst for 30 years. “Going around with Jimmy the janitor from the church—we’d take his truck and we’d bring back two to three loads each morning. We were the biggest nerds you’d ever seen, with our hammers and our screwdrivers. ‘That door still has the door knob on it!’ And there’s nothing more exciting than a three-legged table,” he laughs.

Or a piano. One year, someone gave him an entire piano, which produced a whole series of unique and delightfully “keyed” birdhouses.

“That stuff was going to garbage and I was picking it off people’s yards and making a birdhouse and they were buying it back—sweet!” he jokes. “But I was also saving it from the dump. When I started making birdhouses, I was talking recycling and reusing. It went from being a novel thing to there being urgency. I still have the same idea I did 25 years ago but now people are seeing the need.”

Now that the spring cleanup is cancelled and he’s not allowed to scrounge at the dump, Don gets messages from people telling him where he can find an old dresser, or he’ll find furniture and bags dropped off in his driveway.

All treasures, he says.

No material is ever too old or too precious for a birdhouse, and some of them are downright historical. A few years ago, the current owner of Amherst’s three-storey department store built in 1906 as Two Barkers (which later became Margolians, which later became Dayle’s) offered him wood from the original store and he was able to make a collection of Barkers birdhouses inspired by that beautiful old building.

Along with his efforts to reuse and recycle, Don considers his creative work “birdhouse therapy.”

“My sanctuary time is in the basement,” he says. “I just enjoy doing the creative thing, and God hears a lot of talking down there.”

Perhaps some of that talking, and thinking, makes its way into the birdhouses. For Don, it’s all about the story that the gathered materials want to tell.

“Sometimes I don’t know what I’m going to do with it, but I know there’s a story there somewhere.”

When he starts laying out the materials he’ll be working with, he’s thinking about the story but he’s also wondering, “Why would this be someone’s tickle? Why would this speak to someone?”

He says he’s made a lot of ugly birdhouses over the years, acknowledging it often takes two or three ugly ones to get to the really good ones.

“And I always think, ‘This morning, I’m going downstairs and I’m making this birdhouse’ and very seldom does that happen. Very seldom do I create the one that I was going to do. It’s a different story than I was expecting.”

Art mirroring life, perhaps. After a stroke in February 2018 compromised his ability to speak, he worried he’d also lost the ability to make his imagination-intensive birdhouses. This compounded his concern for the parts of his job that involved the youth group and drama.

“I love words so all of sudden, when they disappeared, I wondered if I’d have my words anymore.”

A few months after the stroke, his speech pathologist encouraged him to try making a birdhouse, and Don was relieved to discover he could still nail a roof on.

“It was wonderful,” he says. “Once again, I got to enjoy it. As a youth minister, the burnout rate is pretty high. All of a sudden, having that quiet creative time again…”

The three post-stroke birdhouses he made are part of his private collection, what he calls the “aphasia birdhouses.”(Aphasia is the inability to understand or express speech, and is caused by brain damage.)

With their upside down and crooked letters, these birdhouses represent the aphasia he overcame.

“That’s my story. They are meant to try to give people an understanding of what I was going through, so there’s therapy there, no doubt about it.”

Currently Don’s birdhouses are named “Bent Cottage Creations” after the 250-year-old house he moved into and restored 15 years ago (Bent Cottage is Amherst’s oldest home). While most of his creations end up on display in people’s homes, he strongly denies that they are not for birds, despite one customer claiming a bird could hurt itself flying into the fork positioned artistically beneath the hole.

“Have you ever seen a nest in the middle of a thorn bush?” Don says with a roll of his eyes. Finally, he held a competition asking for photos of the birdhouses being used. One woman said three generations of birds had been using her Don Miller birdhouse, and another one submitted a photo of a squirrel sticking its head out the hole.

“But most people put the birdhouse on their dining room table,” Don says. “It’s hard to attract birds there.” 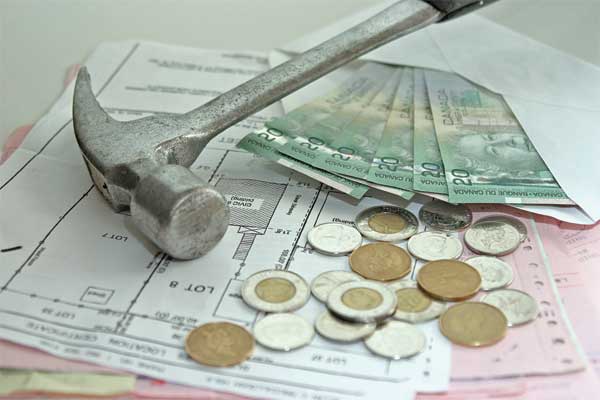 Kitchen Renovations on a Budget? Absolutely!

You've been flipping through magazines for months now, circling the counters you want, picking out colours, dreaming about flooring and lighting and what you could do to spruce up your kitchen if...

Going squirrely? Here’s how to help keep your bird feeders for the birds (photo: feeders)