As soon as my line hits the bottom of the North Atlantic, something starts yanking on it. Something insistent; heavy; hungry. I let out some slack and throw the wooden holder into the bottom of the boat to free up my hands to jig. As the fish toys with my line, Randy Snow quietly pulls up the first cod of the day.

“Not real big,” the Fogo Islander says apologetically. Well, it sure looks big to me, and within 10 fairly chaotic minutes, four more fish follow—one-third of our boat limit of 15.

This is shaping up to be the shortest, albeit most successful, fishing trip of my life, except hand-line fishing is not that easy. There are no rods, just thick green polyester line wrapped around a rectangle of wood (technically called wooden hand-line reels), with a heavy silver lure attached to a single hook and a red-and-yellow wisp of plastic that looks like a sea worm.

“So just reel it out and let it drop?” my husband Rick asks Snow. “Now if I feel a bite, I just wind it?”

“You’ve got to let it hit the bottom,” chimes in Tom Earl, a chef who owns Tilting Harbour B&B and is eager to get a feed of fresh fish, plus heads and bodies to make stock.

It takes some coaching, but Rick gets the first fish of his life off the coast of Fogo Island, my kids have a formative fishing experience on blessedly calm seas and we quickly catch our limit in what the government calls the “Newfoundland and Labrador Recreational Groundfish Fishery”—or, what the people call “the food fishery.”

Over a pan-fried cod dinner, I think about 1497 when explorer John Cabot arrived, saw waters teeming with fish and helped spark the birth of an enormous new commercial fishery. By 1992, the Canadian government declared a moratorium on the northern cod fishery to combat decades of over-fishing and depleted cod stocks. The economic repercussions are still being felt—but Atlantic cod is still king here.

This year, the government allowed 39 days between late June and September for the food fishery. It also controls a small commercial cod fishery mainly with an inshore fixed-gear fleet that uses long lines, gillnets and hand lines.

Snow, a commercial fisher, takes us out on the weekend in his boat, docked near the Fogo Island Co-operative Society, which has three seafood processing plants on the island and was formed in 1967 when the province tried to force islanders to resettle on the mainland or come up with ideas for a long-term, sustainable economy. In something dubbed the Fogo Process, the people decided to stay, and the co-op took over processing facilities abandoned by private enterprise. Now it harvests and processes North Atlantic snow crab, cold-water shrimp, Greenland halibut (turbot), cod and other groundfish, pelagic species like mackerel, herring and capelin, and sea cucumbers (which, as their name implies, are insane looking marine animals).

If you’ve seen Fogo Island cod on menus across Canada, thank Tony Cobb and Janice Thomson. With Fogo Island Fish, they pay fishers double the market rate to hand-line cod for top chefs and restaurants. The fishers use day-boats and the traditional method that we used of “one line, one hook, hauled up by hand, resulting in zero by-catch.” The sustainably caught fish is bled and washed at sea, kept on ice and flash frozen at the wharf. “Fish when the fish are fat” is the group’s motto, so they fish in the fall when the cod are heavy from eating baitfish all summer.

Cobb wants us to eat only Canadian fish in a water-to-table movement that rivals the successful farm-to-table movement. That means saying no to supermarket, fishmonger and restaurant cod quietly imported from places like Iceland, Norway and Russia.

On Fogo, chefs get creative with cod. The Fogo Island Inn, the brainchild of Cobb’s sister Zita, routinely showcases cod. At his bed-and-breakfast, Earl makes the occasional dinner for guests and loves the simplicity of baked or barbecued cod over greens from Winston Osmond’s garden at Herring Cove Art Gallery & Studio. “The best cod to use is the cod you catch yourself,” pronounces Earl. Ask around during the food fishery and you’ll quickly find someone to take you out.

At Bangbelly Café, chef Ian Sheridan has created “the perfect cod sandwich” that pairs fresh and smoked fish with crunchy red cabbage and radish on a homemade milk bun. He puts smoked cod on toast, bakes cod with a barbecue miso glaze, and has a popular seafood roll with local cod and shrimp. “Cod is a vessel—a source of protein,” says Sheridan. “It’s a plain white fish and so you can make anything a star and that in turn makes cod the star.”

The place to go to learn about salt cod is the historic Dwyer Premises in Tilting, which boasts a wooden house, store (shed), flakes (cod-drying platform) and stage used for a family-based inshore fishery. This is where writer/commercial fisherman Roy Dwyer cleans cod on a traditional splitting table, salts it and dries it. “When I’m at the stage, the doors are open. Definitely Newfoundlanders know what you are doing, but tourists ask a lot of questions so you have to explain the process.” His wife Christine works some of their salt cod into fish cakes, which are frozen and pulled out and cooked as needed.

“You know what the Irish called Newfoundland?” Dwyer asks, launching into the tale of the people who came over on early fishing vessels and gave the province the Gaelic nickname Talamh an Éisc. “The land of the fish.”

Serve in bowls with white rolls for dipping. Dice the fish fairly small so it cooks quickly and melts into the sauce.

In a medium pot, heat oil over medium heat. Add onion. Cook, stirring, until translucent but not browning, six minutes. Add potatoes and milk. Bring to a simmer then reduce heat to medium-low. Simmer until potatoes are falling apart, about 35 minutes.

Transfer to a food processor. Process 1 minute until smooth. Add two cheddars and Parmesan. Process until smooth. Add lemon, salt, pepper and nutmeg. Blend just to incorporate. Spread cod out in buttered 1.9L (2 quart) oval or round baking dish. Pour sauce over it.

For topping, mix panko, butter and savoury in a small bowl with a fork. Sprinkle over dish.

Bake in preheated 350°F (180°C) oven 30 minutes or until bubbling and lightly browned. For a darker crust, quickly broil on top rack, about one minute.

For the greens: separate chard leaves and stems. Thinly slice or chop leaves; set aside. Chop stems; set aside one cup (250 mL) for this recipe. (Keep remainder for another use.)

For the fish: lay cod over greens in baking dish. Drizzle cod with oil. Generously season with salt and pepper. Sprinkle with lemon zest and thyme. Cut zested lemon in half and add to pan. Bake in preheated 375°F (190°C) oven until fish is medium to medium-well done, about 10 to 12 minutes, depending on thickness.

Serve fish and greens drizzled with any pan juices. Pass lemons for squeezing.

(From Bangbelly chef and co-owner Ian Sheridan, who calls this Cod Save the Queen at the restaurant. Miso paste is in the refrigerated area of supermarkets.)

For rice, combine rice, coconut milk, water, sugar and salt in a rice cooker or saucepan. Cook as per manufacturer’s or package instructions.

Meanwhile, for cod, place butter, miso and barbecue sauce in a food processor. Process until smooth.

Line a rimmed baking sheet with parchment paper. Put a dollop of miso butter under each cod piece to prevent sticking. Using the back of a spoon, rub a liberal layer of miso butter over each piece of fish. (Refrigerate remaining miso butter for another use.) Bake in preheated 425°F (220°C) oven until medium to medium-well done, about six to eight minutes, depending on thickness. Serve cod on rice. 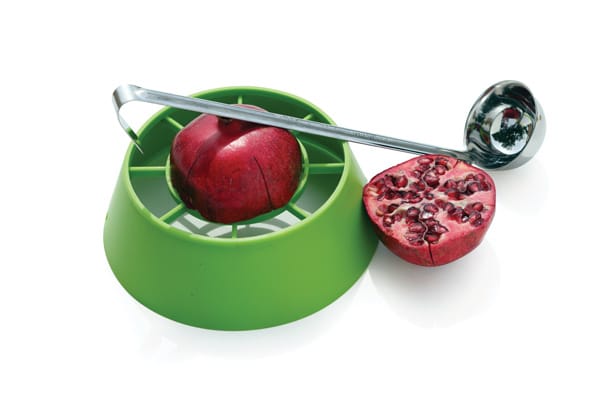 Pomegranates are often referred to as one of nature’s “superfoods.” They are high in vitamin C, folate, and potassium and have significant antioxidant properties. Pomegranate seeds, which can be...