Rethinking the traditional salad and its ingredients

We  were having a dinner party one evening when out of nowhere a lively and somewhat heated debate began. You would be forgiven for thinking that it might have been about politics or even religion, but it was about salads, of all things—that humble food that, through no fault of its own, suffers a massive identity crisis.

Is a salad an appetizer? Can a salad really be considered a meal? If you consider that restaurants now charge up to $20 for a salad listed on an entrée menu, it’s clear that particular industry thinks so! If it you add a warm component such as a poached egg or roasted vegetables, is it still a salad? Does it have to contain greens? So many questions, so many varying opinions!

It all came to a resounding halt when one guest loudly declared, “It’s all rubbish to me—regardless of what you say, I for one have no desire to eat the food that my food eats.” Well, then! Regardless of opinions, salads have undergone a significant image overhaul in the past few years. As I alluded to above, many have taken a huge leap from the appetizer section on restaurant menus to having a starring role on the entrée page.

I’m somewhat curious as to why this shift has occurred; healthy eating has been at the forefront for a while but this trend is relatively new. Have we gotten more creative with our salads, or have we reinvented what really makes a salad, a salad?

Any protein works well with fresh greens—everything from steak to tuna tartare can be found in a salad; avocado is immensely popular; add some cheese and a creative and fresh dressing and you really do have a meal that leaves you immensely satisfied, but without that stuffed, nap-inducing effect that accompanies many meals.

Salads as meals have been a thing in our home for many years, and we’ve had many guests comment that they would eat more salads at home if they tasted like mine. I always respond that my salads are more about formula than formal training.

To make a meal type salad we start with a variety of greens—usually a spring mix combined with peppery arugula or spinach—then we add whatever other vegetables we have in the fridge; top with a protein, sometimes hot, sometimes cold; (salmon and steak are favourites, but we often use scallops, too) Toss on some cheese—goat, feta, cubed cheddar, or mozzarella; the possibilities are endless—and lastly I always add some sort of nut.                    Keep in mind that while almost any combo will taste good, I like to make my combos make sense. I don’t as a rule put feta with beef and I wouldn’t pair mild-tasting mozzarella with salmon.

When being creative with salads, think of a food that you particularly enjoy, a banh mi sandwich for example. To riff on that dish, I would layer my greens with pork, add shredded cucumber and carrots, some finely chopped peanuts and a tangy Asian dressing. Voilà, a banh mi salad! In this instance, I omitted cheese because it doesn’t accompany the traditional version of the meal I was trying to recreate, but you could if you wish add in some cold rice noodles.

The last myth I want to bust is the “salads in summer” myth. I get that there’s something comforting about hot food in the winter but it’s really a matter of mindset. “We’ve always done it this way so that means it’s the right way.” Once in a while it’s okay to try new things and who knows: in the process you may just develop a whole new mindset!

WHEN HUSBAND and wife duo Katie and Shane Hayes announced they were opening a restaurant in the small, rural community of Upper Amherst Cove, located on Newfoundland’s Bonavista peninsula, a lot of... 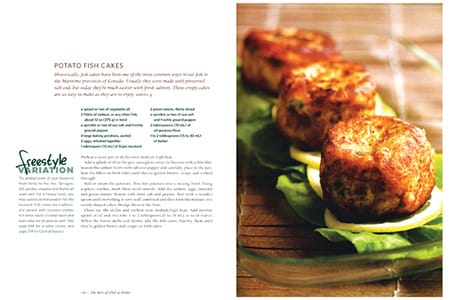 Home is a comforting word. Home cooking more so. But a talented chef cooking at home has it all—the expertise, the knowledge, and more than a smattering of the science behind the food. So it is with...