Everyone knows about the famous snow crab, but there are other species to try, too

In December of last year Johanne and I made it official: we ran away like two teenagers and tied the knot. Now, I know that every marriage has its ups and downs, there are good times and bad, but five months in we hit a snag. It was the start of lobster season and my new bride, who I thought I knew so well, turned to me and said, “I’ve decided that I like crab better than lobster.”

I had no idea; after 15 years you think you know someone, and then they hit you with that kind of information. Truth be told, my wife is not the only one having a love affair with crab; Atlantic Canadians particularly love snow crab, sometimes called queen crab. Fisherman from all over Atlantic Canada venture far out into the North Atlantic ocean—often 400 kilometres offshore and more—from April to November to set traps for this succulent crustacean. Snow crab is exceptionally sweet and the large-sized clusters make getting the meat out of the shells relatively easy.

There is no doubt that snow crab has earned its glorious reputation but sometimes it overshadows lesser-known varieties that are equally as tasty. Jonah crab is fished off the shores of both Nova Scotia and Newfoundland. We really enjoy this shellfish in our home because the claws and knuckles, as with the snow crab, are a bit larger so there is a lot of gain with minimal effort. It is quite often available by the pound from your local fishmonger and if you come across it, give it a try.

Another type of crab that I particularly enjoy is rock crab, the small crab that you see at the beach. They’re not widely harvested because, as you can imagine, there’s not a lot of meat per unit. We’re very fortunate that North Nova Seafoods, which is located right next door to us in Pictou County, processes this tasty crab. They sell the meat, shucked, in one-pound bags, and in my opinion there is no crab species better for making crab cakes than rock crab. It’s extremely flavourful and remarkably moist.

Recently, we’ve been experimenting with a type of crab not commonly used as a food source; the green crab. These crabs have been in our waters for many years but they aren’t native to Canada. It’s believed that they arrived from Europe on the hulls of ships. Green crabs are plentiful and they’re very invasive; they feed on eel grass habitats, causing destruction to an ecosystem that sustains the life of many aquatic species. There is now testing under way to see if they are a viable food source—if so, harvesting them will provide some relief to these delicate habitats. I recently obtained a couple dozen green crabs; both male and female and I boiled them and used the broth, along with some lobster broth, as a base for a bisque. I kid you not, this was by far the most flavourful bisque I have ever had. I’m very much looking forward to obtaining more so that I can try them in other recipes.

Lobster prices are steadily climbing and as consumers we may not be able to enjoy them as often, or in the quantities that we once did. Perhaps next time you’re hosting a seafood feast, you’ll consider adding crab to your lobster dinner, and you might find that it can help stretch your hard-earned dollars. Or perhaps you will see fit to sit down with a couple dozen snow crab clusters and determine for yourself whether you are on Team Lobster or Team Crab.

As for Joanne and I, don’t worry, we are completely Team Bossé and our relationship remains absolutely crab-ulous! 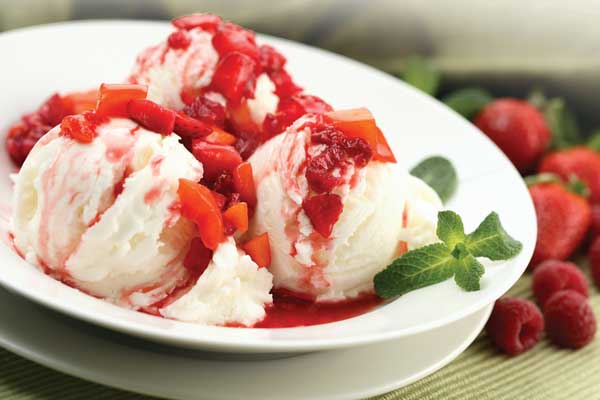 For many of us, ice cream is synonymous with carefree youth and comfort. Is there any wonder this delicious dessert is timeless? 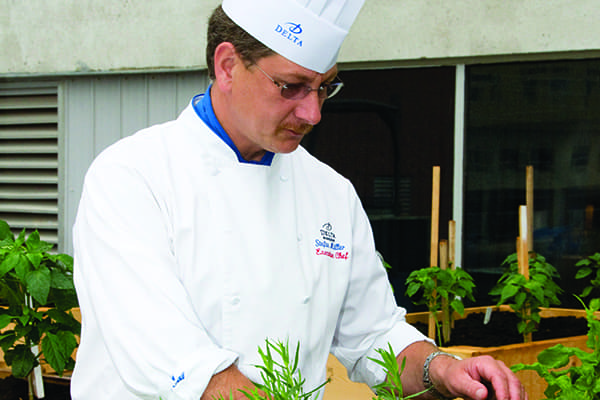 Chef Stefan Mueller has had a long and illustrious career working in high-end restaurants and competing in culinary events. Since 2002, he has been executive chef at the Delta Beauséjour in Moncton.