Everything you need to know about the best oils for cooking

Choosing a cooking oil can be a confusing task. There are many considerations from the type of oil, processing, impact on health and culinary use according to flavour and temperature stability (aka smoke point). If researching the topic, we’ll quickly come across an abundance of conflicting information. Let’s break down data so you have reliable information to make an informed choice.

Oils are made up of varying ratios of fatty acids called saturated fat and unsaturated fats which include monounsaturated (MUFA) and polyunsaturated (PUFA). They can also provide a source of vitamins and disease fighting substances called antioxidants. The particular make-up of an oil can impact our health for better or for worse. PUFAs (including omega 3, 6) and MUFAs decrease lousy LDL cholesterol and triglycerides (fat in the blood), while increasing the healthy HDL cholesterol. High levels of LDL cholesterol are linked to heart disease and stroke. Unsaturated fats, in particular PUFA, have shown to play a positive role in various diseases including diabetes, high blood pressure, cancer, Alzheimer’s, rheumatoid arthritis and digestive conditions.

Many different antioxidants play varying roles. Antioxidants obtained from foods including oils, may play a role in decreasing inflammation, as well as, preventing and reversing damage done by free radicals, therefore reducing risk of chronic diseases including cancers, cardiovascular disease and death from
all causes.

Saturated fat comes from animal products (fatty cuts of meat, high fat dairy, butter, lard) and tropical oils (coconut oil, palm and palm kernel oil). High saturated fat gives oil its semi-solid texture at room temperature. Liquid oils contain a small amount of saturated fat but the ratio of unsaturated is much higher. We need a small amount of saturated fat every day, but excessive intake has been linked to increasing LDL cholesterol. Saturated fat intake should not exceed 10 per cent of total daily calories. Some health organizations like the American Heart Association recommends less than 6 per cent of total calories. Based on a 2,000-calorie diet, that’s 13-22g a day. It can add up quickly! For example, a single tablespoon of coconut oil has 12g saturated fat (more on tropical oils below)

Aim to include 2–3 tablespoons of unsaturated oil (from MUFA and PUFA) every day and most importantly replacing saturated fat choices with unsaturated fats, such as swapping butter and coconut oil for olive oil.

Various methods are used to extract oil from parts of the plant. Refining oils involves pressing, heating, and adding food-grade chemical solvents. For unrefined oils, the extraction process is done by mechanically pressing/crushing without heat and chemical solvent.

The customer and industry advantages of refining provides a larger yield, increases shelf and heat stability, and at a lower price tag. Refining also produces a milder-tasting, light-coloured oil, which can be a positive or negative thing depending on its use. Refining still retains the fatty acid composition but the heat causes loss of the antioxidant profile and its related health properties.

If you’re looking for an unrefined oil with all the potential health benefits, choose products labelled as ‘unrefined’ ‘cold-pressed’, ‘extra virgin’. Olive oil is one of the most widely available unrefined oils; others may require a little more searching.

Heating oil beyond its smoke point causes oxidation. Oxidation changes the oil’s makeup, leading to an unpleasant taste and formation of harmful free radicals. It’s important to choose the correct oil based on its smoke point. If your oil is smoking, throw it out and start again.

Exposure to light and oxygen also causes oxidation, with some oils being more susceptible than others. As a general rule, all oils should be tightly capped, and stored in a cool dark place. Fish, some nut and seed oils tend to
be most susceptible and should also
be refrigerated.

Check the expiration date. Oxidation accelerates once opened and depending on the type of oil, your products can last three to eight months (for specific oils check foodsafety.gov/keep-food-safe/foodkeeper-app). Always toss oils that smell and/or taste rancid. Consider your oil usage—the bigger bottle may not be the most cost efficient.

Your top choice is always olive oil, particularly extra virgin olive oil (EVOO). This unrefined oil is the healthiest of olive oils, and in fact it’s commonly the top recommendation of all oils. It’s a staple in the heart-healthy Mediterranean diet and the most researched of all oils for its health benefits. In addition to its high MUFA content, it is also rich in antioxidants called polyphenols, which have been shown to potentially decrease risk of cancer, diabetes, and Alzheimer’s.

EVOO has a peppery and at times pungent flavor, making it great for salad dressings, adding that finishing touch to vegetables and savoury dishes. It can be used in cooking at low to moderate temperatures, but not beyond 320-375°F (160-190°C). Evolving research has shown that EVOO can be heated beyond that temperature, as its rich antioxidant and fatty acid content may play a protective role against oxidation.

‘Classic’ or ‘Pure’ or ‘Virgin’ or simply ‘Olive oil’ is a blend of refined and extra virgin. This has a moderate flavour and a smoke point is 391-410°F (144-210°C). Due to the partial processing, the benefits of the antioxidants is diminished.

Extra Light or Light olive oil is a refined oil. The fatty acid composition provides health benefits, but limited antioxidant benefit. It is the most versatile with a higher smoke point (390-470F), a mild flavour and at a lower cost. Keep in mind, ‘Light’ does not mean lower in calories.

The runner up is avocado oil, the newer oil on the shelf. Unlike olive oil, this oil lacks a lot of scientific research but it’s predicted to have similar health benefits due to its comparable nutritional make-up. Unrefined avocado oil is more versatile than olive oil with an unusually high smoke point at 482°F (250°C) and a milder flavour. As more research evolves, avocado oil may be sharing or taking over the podium.

Corn, safflower, peanut, canola, soybean oils have varying ratios of unsaturated fat and a low level of saturated fat. These oils tend to be refined so health benefits are reduced. Unrefined versions are uncommon and may be challenging to find, as well as available at a higher cost. The particular added benefits of these unrefined oils is not well known as they’re not commonly consumed or researched. Vegetable oils can be used in baking and cooking due to their mild flavour and medium to high smoke point from 400-450°F (204-232°C).

Palm kernel oil has a similar saturated fat make up to coconut, while palm oil is lower, around 50 per cent saturated fat but still considered high. Palm oils may not be as popular as coconut oil, but are commonly used in processed foods. Canada’s recent ban on the more harmful trans-fats has increased palm oil use as a replacement for partially-hydrogenated oil—in essense, replacing a high trans fat with high saturated fat.

Coconut oil provides a distinct flavour in certain recipes, just be conscious on how much and often you use it. Substitute for a low saturated fat oil when appropriate, add it cooking when it’s a key flavor. Its smoke point is 350°F (177°C) for unrefined, 400°F (204°C) for refined. For vegans who may consume very little saturated fat, coconut oil may be your source of choice.

Sesame seed, walnut, hemp seed, flax seed oil all consist mainly of unsaturated fats. Walnut, flax and hemp seed oils provide a higher amount of a PUFA, omega-3. This fatty acid is well known for its heart healthy benefits. These oils are more prone to oxidation and should be stored in dark bottles in the fridge. These oils have a moderate smoke point with the exception of flax seed oil at 225°F. Their nutty flavour goes well in a salad dressing, drizzled over food, or added
to a smoothie.

Sesame seed oil consists mostly of MUFA; its smoke point is 350°F (177°C) refined to 450°F (232°C) for semi-refined. It has a strong flavour and a little goes a long way when added to a stir-fry and other Asian cuisine.

So there you have it and that’s just the basics on cooking oils! The bottom line: all oils liquid at room temperature provide some benefit, especially when used to replace saturated fat. If you’re looking to fine-tune your oil choice, EVOO is the top choice as your everyday oil. Use avocado when cooking at a higher heat and/or looking for a milder flavour.

Memories of kitchens past

When it comes to comfort food, we turn to carbs and heritage recipes 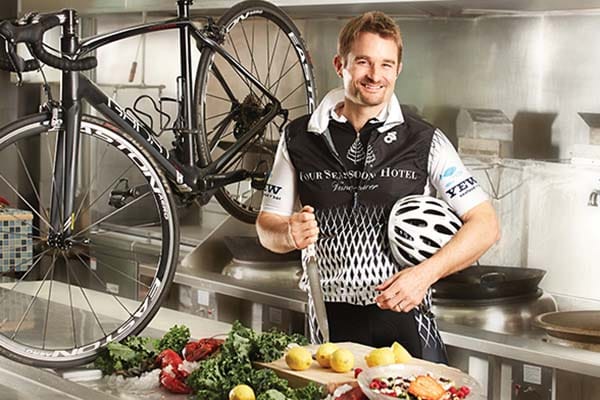 Ned Bell is the executive chef at the YEW Seafood + Bar in the Four Seasons Hotel in Vancouver. This summer he biked across the country in 10 weeks to raise awareness for sustainable seafood and...