Overfished off Atlantic Canada to the point of being endangered, porbeagle sharks are now making a comeback, thanks to scientists—and fishermen.

Smells of squid and diesel penetrate the salty breeze as the fishing vessel Pic Pocket motors south from Nova Scotia, land fading to memory. Captain Patrick Gray and crewman Victor Bain bait and deploy hundreds of hooks along a multi-kilometre longline, stretching far out of sight. It’s repetitive work that’s interrupted only when floats are added to suspend the gear at a targeted depth, or locator buoys to aide retrieval. Off the stern, shearwaters and gulls cut the expansive sky, jockeying for position as they grab at bait before it’s pulled under—an occasionally fatal pursuit.

Normally this would be just another work day for the two commercial fishermen. The difference today is that Romney McPhie, a marine biology grad student, has joined them. As the crew work she sits by the gunwale, counting and recording details as every hook goes overboard. Together they’re conducting a survey devised and led by Dr. Steve Campana from the Bedford Institute of Oceanography, in Dartmouth, NS, to better estimate how many porbeagle sharks roam Canadian waters. Ongoing research into the biology and abundance of these “fast, energetic and fascinating” fish is necessary to ensure that catches are sustainable over the long term, says Campana.

“Porbeagle sharks are one of the apex predators—the kings of the marine food chain. If we kill them all, strange things are likely to happen to the marine system. Among other things, the food chain could be disrupted—there could be rapid increases in the species porbeagles eat (bony fish like flatfish, lancetfish, mackerel and herring, and cephalopods, particularly squid), or equally likely, increases in their competitors, such as seals.

“In other places in the world, the disappearance of sharks produced entirely unexpected changes in the marine ecosystem,” he adds.

The porbeagle is one of 14 shark species common in Atlantic Canada, including the blue shark, sought after as a sport fish, and the mako and spiny dogfish, also part of the commercial fishery.

While we’re on Pic Pocket, well over the horizon are five other boats with crews and biologists fishing just like us. From the US border, to Newfoundland and everywhere between, all are using standardized sets of gear to systematically fish at 50 survey stations, producing controlled data to reveal the abundance and distribution of porbeagle sharks.

Porbeagles are remarkable creatures related to the great white, sharing a similar body shape. Most measure 1.5 to two metres in length but occasionally some top three metres. They aren’t often seen because they prefer cool water (5 to 10°C) and open ocean; however, occasional sightings close to land can cause quite a stir. They are not known to attack humans, but one look at their teeth suggests that a respectful distance should be maintained if encountered.

It wasn’t long ago that porbeagles roamed the Northwest Atlantic in abundance. Intensive fishing of the shark dates back to the early 1960s, when Norway began operating longline vessels off Nova Scotia. The Norwegian catch, mostly sent to markets in Europe, peaked at approximately 9,900 tons annually before catch figures began to diminish, and the fishery collapsed, in 1967.

Stocks rebounded somewhat in the 1970s and 1980s. However in the 1990s, a renewed commercial interest in the fishery, this time Canadian, depleted the population. Only then did Canada introduce its first porbeagle management plan, with quotas and regulations.

“The first plan came into effect in 1998, as soon as we developed our first stock assessment,” says Campana. “By that time, the damage had already been done in terms of stock decline.”

Nobody really knew much about the shark’s life cycle or even how many were out there, which made it difficult to know how many could be sustainably caught. Marine biologists were enlisted; they sought the help of fishermen.

They learned that porbeagles are slow growing and can live more than 30 years. It takes males eight years and females 13 years to reach sexual maturity—that’s a long time to evade hooks, pollution and other threats before they’ve had a chance to reproduce. They have a low reproductive rate, producing litters of one to five pups per year.

Each discovery added a new piece to the puzzle; the porbeagle began to yield its secrets, allowing for better estimates of remaining stock levels.

Today, through regulations and fishing quotas, the species has slowly started to recover, although Campana estimates the population is still only 20 to 25 per cent of its pre-1960 size. A total of 185 tons of porbeagle sharks are now fished each year off Nova Scotia. A handful of licenses also go to fishermen in Newfoundland, New Brunswick and Quebec.

Fishermen have no problem filling their small quotas, and some lobby for an increase, believing that stock levels are underestimated. More comprehensive information will help bring all parties to an understanding, but how do you determine the number of sharks offshore? This is where surveys prove their worth; they’re considered the most accurate method to estimate oceanic predator populations.

Campana, his staff, and commercial fishermen conducted Canada’s first East Coast shark survey in 2007, and the second in 2009. When successive results are compared, the surveys reveal overall trends and changes, and these two sets of data will eventually be compared within the larger context of future surveys in order to track long-term trends and facilitate management decisions.

Back on Pic Pocket, things are slow; hundreds of hooks have been retrieved without a single shark, and I’ve seen enough squid to last a lifetime. McPhie, sitting on a small folding chair, faithfully records each hook as it comes back empty. Captain Gray tells us that just a few weeks earlier while on a training trip with the survey biologists he had no problem filling his boat with sharks.

Suddenly there’s a commotion. A large form rises from the depths and a gunmetal gray shark struggles at the surface. Everyone scrambles and water splashes as the crew reaches overboard and gaffs it. In seconds, the porbeagle is secured and hoisted aboard.

McPhie goes to work while the crew keeps pulling the longline. She measures and records specific details, including size, sex, what hook it was on, and how deep that hook was fished. Similar data from each catch will shed light on overall feeding patterns, distribution, and growth structure. She works fast; the next shark could be just a hook away.

Months later, at his lab in Dartmouth, Campana shows me data he’s extrapolated from each station, indicating an approximation of shark density, distribution, and size structure for the surrounding areas. It’s interesting but even more fascinating are the results from sharks that were tagged and  released.

While most sharks caught during surveys were sold at market, a number of individuals—healthy, energetic, mature and usually female—were tagged and released with sophisticated devices that monitor their position and depth for months before transmitting the stored data to a satellite.

This unprecedented look at the actual movements of porbeagles as they meander through the Northwest Atlantic has led to many of Campana’s greatest advancements in understanding porbeagle biology. Just recently the tagging has revealed that pregnant porbeagles migrate a couple thousand kilometres south—well beyond their previously known range—to give birth in the Sargasso Sea, and that the sharks dive below 1,000 metres, presumably in search of cool water.

Fortunately the porbeagle is not a lost cause. Although stocks are depleted, progress is ongoing, thanks to the partnership of fishermen and scientists to study this vulnerable species. Industry cooperation and funding has been forthcoming as fishermen realize that long-term sustainability is in their profession’s best interest. For them fishing is not just a job but a traditional way of life that needs careful management, if it’s to continue.

After hours of pulling hooks aboard Pic Pocket the crew land a handful more sharks; McPhie records the specifics of each. Then a spectacle erupts that symbolically mirrors the greater struggle. A large porbeagle is hooked and thrashes wildly on the surface as the crew scramble for their gaffs. At the last second it breaks free with a powerful surge of the tail, and disappears back into the depths to feed and mate another day. Such is the tale of the porbeagle: all but gone a few decades ago, only to have things turn around at the last minute, and now on the road to recovery. 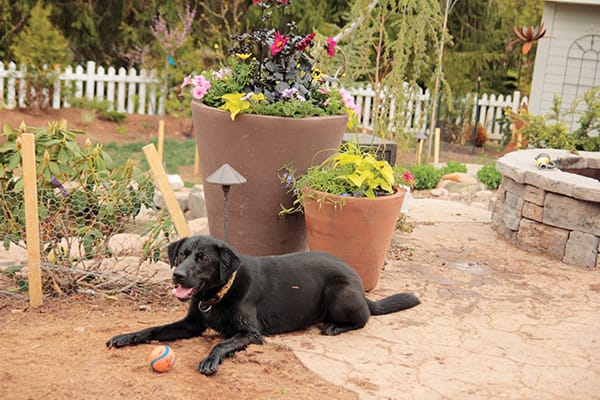 It's a Dog's Life

THERE’S A cacophony of barking when I knock on the door of Linda Lusby’s home on a quiet cul-de-sac in Wolfville, NS. She comes to the door of her mudroom, welcomes me, and says with a mischievous grin,... 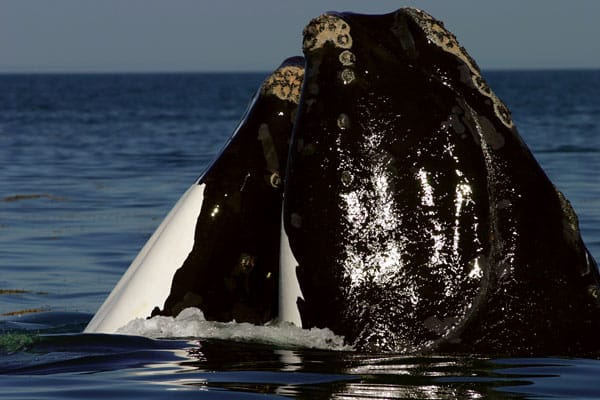 One day, while Dr. Lindy Weilgart, a research associate at Dalhousie University, in Halifax, was sailing on the Indian Ocean, she put on flippers, a snorkel and mask, and jumped into the water... 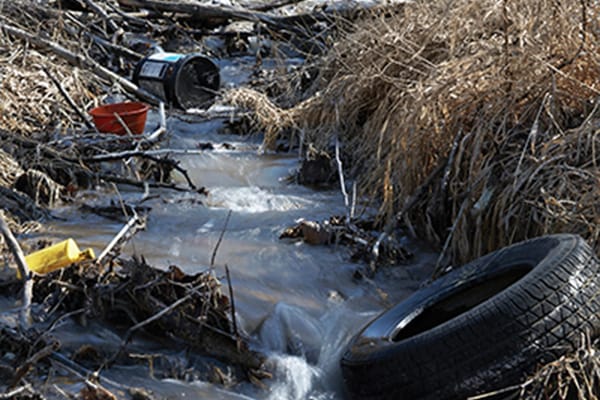 What, we wonder, goes through the tiny mind of someone who heaves a whole bag of fast food containers and two empty Coke cans out of a car window? What’s so difficult about simply taking the rubbish...