While technological advances have changed the way we stay in touch with family, the season’s true blessings remain intact.

Almost 7:30, my grandfather said. He pulled his gold watch from his vest pocket and held it out as far as it would reach on its fob to squint at the time. “We should be getting ready to go over.”

It was Christmas Eve, 1954. I’d had supper at my grandparents’ house to allow my parents time for last minute Yuletide preparations. By “over,” my grandfather had meant to my parents’ house, across the backyard where we lived in Miramichi, NB. The family would congregate around the telephone there and wait for the much-anticipated Christmas call from my uncle in Smokey Lake, Alberta.

In the 1950s long distance was expensive, to be used only in emergencies or on very special occasions such as this, the yearly call from Western Canada. Uncle Loris came home every second July and wrote weekly, but the call coming on this night, of all nights, was something anticipated with excitement and joy.

Glancing at my grandparents as they donned their coats, hats and boots, I recognized their expressions. I’d once glimpsed myself in the hall mirror late one Christmas Eve when Santa’s visit was imminent. I’d looked the same.

“Put on your coat, Darlin’.” My grandfather’s words always echoed his Celtic roots when he was happy.

“The yard is slippery. We don’t want to be late.”

I glanced at the presents on the oilcloth-covered kitchen table, piled there after the meal was cleared away. A family Yuletide tradition, gift opening took place in their kitchen after my uncle’s call. It was much warmer near the oil stove than in the parlour where the decorated Christmas tree stood—well preserved in the chill of the unheated room.

“Yes, Granddaddy.” I struggled into my coat and boots. Christmas Eve was not a time to be belligerent.

We started across the short distance that separated our houses, my grandmother on my grandfather’s arm. Brimming with seven-year-old Christmas excitement, I slid and skidded ahead on the ice.
Soon we’d get the call and could move on to gift opening. And later, much later, when I was bundled off to bed, there’d be the visit from the Jolly Old Elf hisself.

I’m not saying I didn’t enjoy Uncle Loris’s call. He had a ranch with horses and dogs, the two creatures I fancied with all my heart. But he didn’t talk about them much; he mostly wanted to know about us and how we were. Anyhow, I couldn’t pet them over a telephone wire.

Looking up at the stars, diamonds in a sea of black velvet, I sucked in a breath of cold, clear air and spread my arms wide to swing around and around in an effort to view them all.

“Come along, Gail,” my grandmother said, never quite as patient with my meanderings and musings as my grandfather.

“Coming, Nanna.” I slid the rest of the way and bumped to a halt at the bottom of the steps.

“Always dreaming, that child.” Nanna shook her head and proceeded inside as my grandfather held the door open for us. Granddaddy winked at me as I passed him.

Inside, my parents greeted Nanna and Granddaddy before we all made our way into the dining room, where the phone sat on a small table in the corner. Chairs had been placed around it in a semi-circle, and we settled down to wait.

“The yard is very icy,” my mother said, making an attempt at small talk, while the air fairly crackled with anticipation.

“Ice, ice and more ice,” Nanna replied adjusting herself into a comfortable position. “We never had winters like this when I was a child.”

“Makes for good skating on the river though.” Granddaddy nudged me and slanted a conspiratorial look.

“Sure does,” my father joined in. “I remember one Christmas when I was eight or 10, and all I wanted was screws to fasten blades to a pair of old boots so I could skate on the mill pond.”

“I’ve asked for skates this year….” The phone interrupted my comment. Its ring made us all start—even though we were expecting it.

My father answered it, as always.

“Hello. Loris?” He was speaking louder than normal; reception was never that good. “Merry Christmas. Yes, we’re all here. How is the weather in Alberta? Good, good. Here, I’ll let you speak to your mother.”

My grandmother, her eyes shining like the stars in the Christmas sky, took the receiver carefully, gingerly, as if she were afraid she might sever the connection. “Loris, hello, Dear.”

Her conversation lasted only a few minutes before—with tears in her eyes—she bade her son farewell until July, and handed the receiver to my grandfather.

“Merry Christmas, Son. How’s everything? Livestock doing well? Do you have much snow? That cold, eh? How are Isabelle and the boy? Yes, yes, we’ll take a turn talking to them.”

My mother spoke next, then the phone was handed to me to speak to my cousin Bobby. The adults always seemed to think children wanted to speak to children when what I really wanted to do was talk to my gregarious aunt, who would tell me about the horses and dogs on their ranch.

Finally my father took the phone to wind up the call. It was over for another year. As he replaced the receiver on the cradle, Nanna pulled a handkerchief from the sleeve of her sweater and sniffed into it. Granddaddy cleared his throat.

I waited patiently. There were always a few moments of silence after the call. Then my father stood and looked at me. “Maybe we should head back across the yard. I’d say it’s just about time to open presents.”

“Yes,” said Granddaddy as he pulled out his watch and cleared his throat again. “I’d say it’s just about that time.”

We bundled into coats, hats and boots for the short trip back across the yard. This time I didn’t pause to star gaze. Eagerness sent me gliding over the ice, causing Nanna to call out an admonition again.

I got my skates that Christmas. My father and I went gliding across the millpond the next day. His skates, long-bladed contraptions called reachers, were a present from my mother—new, too. His days of asking for screws to fashion a pair from old boots were long behind him.

These days, stories about skate screws and the magic of a Christmas call have become historical anecdotes. Communications have undergone such immense changes since those days of the Christmas call—my parents and grandparents would have believed them to be the stuff of science fiction.

This Yuletide, as I sit at my computer with a cup of tea reading e-mails from family and friends, knowing that Skype and other technological advances make long-distance communication easier, I marvel at how far we’ve come. But as I look out a window and gaze up at the stars, as I have done for so many a winter’s night, I know that the true marvels haven’t really changed that much. I feel blessed.

As each year begins to fade into nothingness, I like to take a reflective look at my "bucket list." Where did I go, who did I see, what did I do; did I have enough fun and did I learn anything? The... 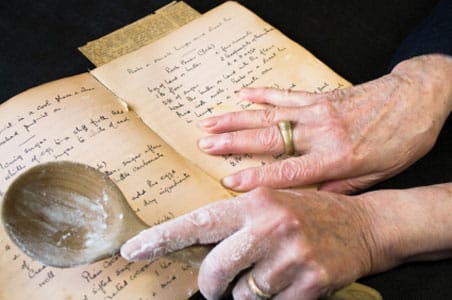 "Pray for peace and grace and spiritual food. For wisdom and guidance, for all these are good But don't forget the potatoes." 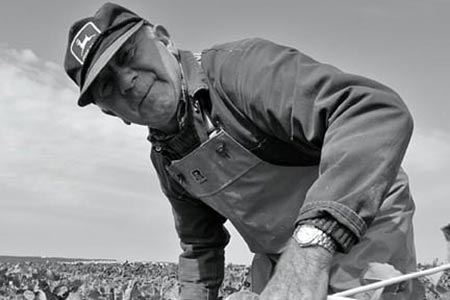 The People are the Place

In Reefs Harbour on Newfoundland's Northern Peninsula, a handful of fishing sheds-their sides weathered to a uniform silver-grey-stand like forgotten teeth on a half-buried lower jaw. Lobster...