Pausing to rest by a small waterfall during a canoe portage from Cloud Lake to Frog Lake in western Nova Scotia, I dropped a small lure into the pool below, with supper in mind. An odd, expanding, white object rose from the watery depths. Peering closely through ripples, I lowered the lure again. The object grew larger again. Suddenly I saw the open mouth of a large snapping turtle. Time to reel in!

Found from Nova Scotia and New Brunswick westward across southern Quebec as far as southeastern Alberta, and then southward east of the Rockies to Texas, the current range of snapping turtles extends to Florida and back up the Atlantic coast to New England. Scattered populations occur in Veracruz, Mexico, and in parts of Central America. In North America it can be found from sea level to elevations over 2,000 metres inhabiting brackish coastal and fresh waters. Fossil records date the earliest turtles back at least 185 million years.

My snapping turtle (Chelydra serpentina) sightings have often been unexpected. These aquatic reptiles spend much of their time resting underwater in shallows within a neck length of the water’s surface. Equipped with strong, wide legs and webbed feet, they may also be seen moving along weightlessly, like aquatic astronauts, traversing slow-moving stream and lake bottoms and passing through aquatic vegetation. When they want to, snappers can move quickly underwater. They also hide under stumps, roots, brush and in muskrat burrows and lodges.

Canada’s largest turtles require about 15 years to mature. Tending to outlive their researchers, snappers have attained ages of more than 57 years in captivity. Older adults can sport a 50-centimetre long carapace (shell) and weigh more than 27 kilograms. The rear edge of their satellite-dish upper shell has jagged serrations. The shell can be black to light brown in colour but is frequently obscured by a covering of green algae. The underneath shell, called a plastron, is relatively lighter coloured with dark markings and is smaller than the upper shell. Snappers have highly developed senses of smell, sight and touch. Adult shells are heavy on land, which forces occupants to raise their “mobile home” before walking.

Consuming both plant and animal matter, snappers will scavenge almost any dead food they can fit their jaws around. Hunting methods include waiting, then using lightning-quick lunges to grab an unlucky passerby or to threaten an unwanted intruder. Snappers also stalk potential prey. Young ducklings on water may suddenly disappear. Feeding occurs underwater. Such scenarios often create a fearsome, sinister reputation that prompts some people to kill snapping turtles whenever they find them. Snappers are also hunted and trapped for their meat. I wonder how much mercury accumulates in their flesh with old age and a steady diet of fish?

Land travel is rare, except during the egg-laying period. This is preceded by a spring mating season when the male and female perform a face-to-face ritual. Sweeping their heads side to side in opposite directions for several minutes, they eventually stop, stare directly at each other for a time and then they mate. The egg-laying season for females begins in eastern Nova Scotia in mid-June and extends into July. Females trundle out of waterways searching for nest sites above high water marks on sand or gravel beaches. Failing to locate a suitable beach, females resort to muskrat lodges, gravel roadsides, tilled gardens, and sawdust piles at old mill sites, or simply dig a hole in nearby woodlands to lay their 20 to 40 eggs. These are dutifully covered before they return to water. Egg incubation and hatching depends on the heat of the sun and soil and can take as long as 125 days. I’ve been fortunate to witness hatching in late summer and the subsequent awkward dash for water that youngsters undertake when they leave the nest. In Atlantic Canada some hatchlings overwinter in their nest and leave in the spring. More than 90 per cent do not survive to their first birthday. Mortalities may be the reason so many eggs are laid. Many gardeners understand that nest sites are traditional and accommodate annual backyard visits by placing wire mesh over nests to curtail predation from raccoons, skunks, foxes, rats, gulls and crows. Young snappers digging out of the nests have soft shells, rendering them vulnerable if they try to hide in the shells to avoid danger.

Roadside nesting can be a traffic stopper that may prove dangerous when well-meaning humans interfere. These reptiles have long necks that can easily reach around to nab anyone who picks one up midway along the shell to remove it from a road. If someone accidentally steps on a snapping turtle underwater, it usually draws in its head and retreats as soon as possible. On the other hand, sitting on a dock with your feet steady in the water while wiggling toes might confuse a snapper and prove unwise. Shying away from swimmers, a snapping turtle on land that encounters a person will likely attack when approached. Large specimens have sharp jaws and gaping mouths that are capable of amputating fingers and inflicting serious wounds. If it becomes absolutely necessary to move a snapping turtle, pick it up by the base of the tail and hold it away from your body at arms length while transporting it.

Active snapping turtles breathe with lungs, but in cold seasons can resort to absorbing oxygen directly through blood vessels on the surface of the skin. This enables snapping turtles and other turtle species in this region to move to stream and pond bottoms in late fall and early winter. There they hibernate, remaining submerged or buried in mud until spring arrives.

I would not recommend the practice, but it’s interesting to note that captive young snapping turtles can grow into pleasant pets. Some folks who were members of the Canadian Amphibian and Reptile Conservation Society obtained a 20 pound (nine kilogram) snapper that had been rescued in the Muskoka area of Ontario from people who were trying to shoot it in a lake. The animal had a hole drilled in its shell and soon demonstrated that it was very docile. The couple attended many conservation exhibits, carrying the snapper about like a baby, with its massive front feet and head resting on their shoulders. Like a cat or dog, it allowed patting and stroking.

Cold-blooded animals like turtles usually use sunlight to warm up, but snapping turtles are rarely seen out of water except when females lay eggs.

I witnessed one basking once, while on a canoe trip through Kejimkujik National Park. Rounding a point, I saw a large snapping turtle perfectly balanced on a rock. Legs hanging in the air, the mid-point of its undershell served as a fulcrum. The rock rose out of the water at a low angle that allowed turtles to climb to its tip. As the canoe came into sight, the snapper simply stretched its neck, changing the balance, and dropped head first into the water.

That rock has undoubtedly served as a favourite snapper sunning spot for thousands of years. 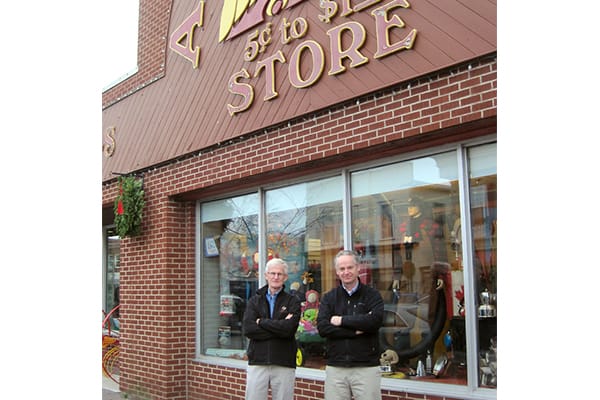 Stephen Jewkeshas a vivid memory of that February night when he was in his late teens, standing outside and watching flames engulf his father’s store in Antigonish, NS. “I can still smell it,” he... 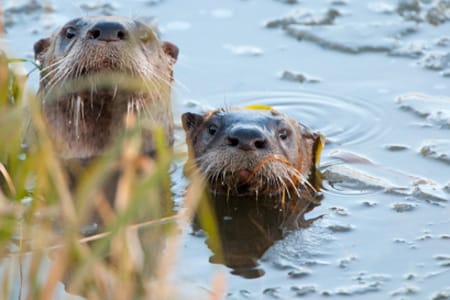 Otter in the Water!

The pond below our home, in Pomquet, NS, affords a tranquil and ever-changing view. Winter settles in with combinations of graceful ice patterns and swirling snowdrifts, punctuated by dark spots...