It seemed so simple in biology class. Herbivores are plant-eating animals, carnivores consume flesh, and omnivores, showing little discrimination, devour plants and animals. Such a tidy way to classify species.... at first. A lifetime of experience has blurred that picture for me.

As a student I liked weekend motocross racing. One day a rider wiped out in a pile of tires placed on the outside of a turn to avert serious injuries. In the process of rubber upheaval a mouse nest was ripped open. Exposed, the mother mouse defensively bit a spectator. She (the mouse) died shortly thereafter. The sole survivor was one baby mouse that I picked up and took home to my apartment.

This little tyke was a herbivore, with teeth adapted for grinding up plants finely, and an enlarged intestinal chamber to digest vegetative material. I dutifully watered and fed it seeds, veggies and leaves. One day I noticed it had watched me catch a fly and was very excited, hopping up and down to get my attention. Giving that little mouse a fly to eat made its day, every day. Eventually I released the little character to find its own way and more flies.

A few years later I was a regional biologist, waiting by a lake in the mainland of eastern Nova Scotia for a floatplane to arrive so I could conduct an aerial wildlife survey. Something under the dock made rasping noises. Peering into the shady gloom below the dock, I spotted a muskrat chipping away at the edges of a freshwater mussel shell. Before the plane arrived it had opened that shell and was dining on mussel flesh. Muskrats are herbivores! Since that time I have learned otherwise. Finding piles of discarded shells in shoreline indentations along the brook where I live was one clue. At first I thought these were the result of raccoons fishing out mussels in the fall, but it became apparent that the shell piles were being created by muskrats under winter ice in shoreline air pockets above the water line.

Brook or speckled trout are officially classified as carnivorous. Whenever I catch and keep a speckled trout for the frying pan, one can ascertain what’s in their current menu by checking stomach contents. Sometimes it’s a slurry of soft insect parts that aren’t easily identified. The carnivore characterization lasted for decades until brother Bill and I took an extended fishing trip one late August. We portaged, crossed a lake, portaged again, crossed another lake, carried the canoe again for a long time, and finally tried our luck in about as remote a place as we could find. Any further in and we would have been heading out.

Trout anglers know August is a generally poor month for fishing in mainland Nova Scotia. We were having no luck until we paddled into a cool stillwater that entered the lake. Casting ahead, Bill hooked and landed several nice trout. We kept two for supper and I proceeded with my normal examination of stomach contents in the bottom of the canoe. Those trout were eating seeds! Don’t they read the books? Not only that, they looked vaguely like small kernels of corn. Maybe that’s why trout are sometimes induced to bite hooks baited with corn? Perhaps they surmise that the corn and seeds are eggs? Always more questions than answers.

Herbivore stomachs are designed by nature to more efficiently digest plant material. Birds that eat seeds often have gizzards equipped with serious muscles that can grind material with small bits of stone that the birds ingest. Grit can be difficult for birds to locate in winter snow. Placing some near feeders can assist their digestion. Plant eaters often have long intestinal tracts in which to absorb plant nutrients. But many seed-eating birds switch to feeding worms, bugs and other animals when they are raising young. This readily supplies the nutrition required for rapid growth, and makes sense with spring’s plethora of insects and dearth of fresh seeds.

Plant-eating mammals like cows, deer, moose and caribou have complicated, multi-compartmented stomachs that are a safe haven for special, microscopic animals that break down the cellulose fibres of plants in their own feeding process. This allows more efficient digestion for stomach owners like deer.

Carnivore intestinal tracts tend to be shorter, in part because cellulose plant fibres are absent in meat, and nutrients in flesh are easier to absorb. It’s interesting that the order Carnivora includes the bears and raccoons, which are definitely omnivores with stomachs that can digest both plant and animal matter with some efficiency. If one were to judge humans by digestive design, we’re classic omnivores.

I’ve spent many years studying moose, and eventually became a volunteer member of the Nova Scotia Mainland Moose Recovery Team that formed after they were declared endangered in 2003. Sifting through the science about the species, I came upon an eyewitness account of moose that really made me think twice about herbivores.

Hiking up a mountain, a science instructor and her son took a break at a cliff-top that offered a view of the lake below. While they watched, a moose walked about 15-20 feet (4.5-6 metres) out into the lake in water that was about 18 inches (46 cm) deep. It proceeded to “paw” the water’s surface. After a time it suddenly plunged its head into the water, grabbing a fish. It walked back to the shore and dropped the fish. When the fish started flopping on the ground, the moose stomped it three times and then ate it in several bites.

If this sounds far-fetched, consider that some prairie farmers in Manitoba leave fish (frozen suckers) on the windswept winter range for their cattle to eat.

Seasonal diets are bound to impose nutritional challenges. Animals need to ingest other trace elements of nutrients, minerals, proteins and other compounds that may be inadequate or lacking in their regular diets. For plant eaters, animal matter provides compounds rarely found in plants. And carnivores probably access vitamins and other nutrients from plants that are missing or hard to find in meat diets. Ever see a dog or cat chewing grass?

Technically, theVore family may be an illusion, an omnium gatherum, one vore-acious feast to which everyone is invited.

Producing for local plates—and beyond 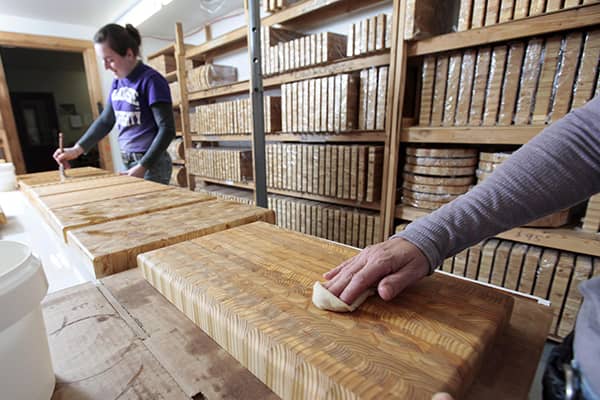 Going with the grain

Are we compelled to feed the birds because we're altruistic, or because they remind us of our chatty, colourful selves?