Her son’s teacher thought he had a learning disability. He didn’t—but the mis-characterization led Margaret Cameron to a lifetime in education

Early in our conversation, retired educator Margaret Cameron turns to me and says, “When there is an opportunity available, I will act. If there’s something I can do to make something happen I will do my very best to make it happen. And I’ve always been that way.”

Her life and career bear that out. She was an elementary resource teacher who wound up helping revolutionize the Nova Scotia language arts curriculum, making it more centred on individual students’ skills. She’s been a volunteer for multiple causes, many of them related to literacy, and continues to tutor adults at the Halifax North Memorial Library, across town from the tidy south end home she shares with her husband, retired professor David Cameron, and an elderly Cavalier King Charles spaniel.

I started out teaching high school Latin and French in Ontario. I taught just outside Kingston, in a little place called Odessa, where the high school had 300 students. Then I taught in Brampton, at Central Peel, which was a huge high school of 1,500. I was there from 1963 to 1966, and then I thought I wasn’t going to teach again because we were trying very hard to start a family. But in the meantime my doctor told me I needed to involve myself in something because I was too uptight. So I got a position teaching Latin and French part-time at a private high school.

I did that until 1969, when we came to Halifax because my husband had just finished his PhD and was hired at Dalhousie. I was about to give birth to our son, and I thought I would never teach again.

Those first years in Halifax were pretty isolating. My only contact with people was with those from my husband’s department and from the Rockingham United Church. I certainly found Nova Scotians very closed. As a come-from-away, it took a while to become accepted, I guess. Plus the first year we were here I was a new mother without any family around. That’s difficult. I learned many things that also helped me reach out to others in similar situations. But as we became more used to Halifax we really liked the size of the city and the culture here.

Watching my son, John, I became fascinated with how children develop language. Soon after John started nursery school, we had a meeting with the woman who ran the school and was one of the teachers there. She suggested John had a very serious learning disability. Well. I had not worked with young children, but I knew enough about kids and how they learned that I was pretty sure he didn’t have a learning disability. I started paying much closer attention to what he was doing. The school was using a reading program at the time, the old Dick and Jane reader. He didn’t like that very much, but he had lots of books at home and we read all the time. So I really had no concerns about him having [any sort of] learning difficulty.

That experience stayed with me and made me think how a false understanding of a child could lead to very, very serious consequences for life. So I guess that’s what really committed me to helping kids who needed help.

When we realized we weren’t going to have any more children, I decided I would return to studying. I had been able to teach in Ontario without a Bachelor of Education, so I went to Dalhousie to do a BEd and then an MA.

After getting my MA I was hired at Rockingstone Heights in Spryfield. Rockingstone Heights has a reputation as one of the most difficult schools in the whole system. That was a gift really—to be sent to a school like that. I was hired as the reading specialist, so I was working with kids who had severe reading problems and learning problems generally. And that experience, plus my interest and research while doing my MA, led me to decide to do
a doctorate.

It was on literacy development within a non-mainstream school. What I argued in the thesis is that every child, given the proper environment, can learn to read and write. Oral language develops through use. If we didn’t have the opportunity to speak, we wouldn’t develop speech. And children need the same opportunity to develop their written skills.

I was fortunate enough to be on a curriculum development committee and I was very involved in writing a new language arts guide. It was changing the way that teachers—especially in the early years—teach children, by involving them in reading and writing their own stories. Not just a curriculum that’s flown in from far off that has nothing to do with them. This caused a fair bit of controversy. But so many kids who had not previously been able to read and write began to show an interest.

A journalism student at King’s called James Houston wrote this article about me. I worked with Hannah, this little girl in the picture, and her story was amazing. She was regarded as being a slower learner. She had a speech impediment. Very shy. Her teacher was intrigued by how I worked with kids, rather than giving them a script to deal with or a program out of a workbook. And Hannah would come and spend time with me at the beginning of the day, three days a week. Just the sweetest little girl and very inquisitive. She would tell some amazing stories and I would encourage her to write these stories. She is now a successful lawyer in New York City.

When I started, my resource room was no more than 10x12. It had a round table, and there were some bookshelves, but most of the books were workbook-type books, not storybooks. So what I did was build up a library. I brought in my own books and encouraged kids to borrow them. It certainly created a different culture.

For the most part I was accepted, I think, but I was so different from the person I replaced because I wasn’t having them working out of a prescribed workbook or textbook. From the beginning, I got them involved in journal writing and telling their own story. For some of them it was a bit like play.

I got them doing fun things. On one occasion when my son didn’t have school, I took him with me and he brought Lego and helped them create things. One of the things I did was start an open house. It began with a science fair. Just kids in grades four to six, and they were able to create something they could present—even if it wasn’t all that scientific. I remember one kid doing a vinegar and baking soda volcano, and he was so excited. They didn’t necessarily have to have it all written down, but they had to be able to explain what was going on. It was allowing kids who hadn’t had an opportunity, to actually perform. The next year, I organized an open house for the whole school that went on the whole day. The kids set up displays in the gymnasium and people were invited to come. It gave the kids an opportunity to be engaged rather than being told what to do.

I became personally involved in a way that doesn’t often happen in schools nowadays—and it would probably be suggested you shouldn’t have that personal involvement. But I would still defend it as an important and valuable thing to do because of the impact on the kids and making them feel that they were important.

After I earned my doctorate, I went back to teaching at the elementary level. That was very purposeful on my part, because I wanted to take what I learned back to the classroom—and I really didn’t have any desire to teach at university.

We certainly have a long way to go in terms of ensuring every child develops literacy by the time they finish elementary school—because if they haven’t, they are going to struggle all the way through junior high and high school and maybe drop out. There are still large numbers of high school graduates who are only on the edge. The problem of people not being literate is an indictment of our education system.

When I retired in 2005, I taught first-year BEd students at the Mount for three years, and I didn’t find that particularly satisfying.

I decided if I really want to do something for literacy, I might as well volunteer, so that’s when I became an adult tutor. I particularly chose the Halifax North branch of the library. I started in the fall of 2008, so it’s been 10 years. I’ve worked with a variety of people, but the most outstanding one—the most amazing one—is Samia Eldik, a woman I started working with in January 2013. She came with her husband and four children from Sudan via Egypt in 2002. The following year, three weeks after her fifth child was born, her husband was killed in a car accident. So she was left a widow with five children. An incredibly difficult situation. She had never been to school in her life. She knew no English. Now, she has graduated with her grade 12 diploma and been accepted into NSCC to study homecare. Her children are all doing well in school, and she has a daughter at Dalhousie.

There is no question that lives are changed as a result of involvement in adult literacy programs and yet they get so little recognition, and I don’t know why that is. 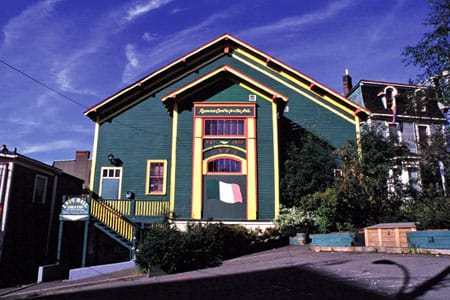 The "Grand Ole Opry" of Canadian comedy produces artists with a more northerly twang-the unmistakable inflections of Newfoundlanders. Instead of Nashville's country music lore, the touchstone of... 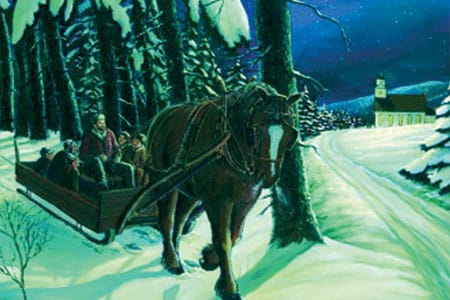 There are many and varied stories, told in film and literature, that attempt to define the life-affirming significance of Christmas. There are archetypes pushed at us every December, from Scrooge to...

It's the time of year when our olfactory senses kick in, big time. After the grey, lingering winter the trees stretch and bud, and nature offers reassuring, reawakening scents-the muddy smell of the...