A pair of intrepid architourists go with the flow of the mighty St. John.

Don't know your apse from a hole in the ground? Neither did I, so when my architect husband suggested a tour of heritage buildings in the St. John River Valley I jumped at the chance to join the new of breed of travelers called architourists: vacationers who plan their itineraries around architecturally interesting buildings.

As an architourist attraction, the St. John River Valley has much to offer, not the least of which is the river itself. Once the 'road' to Eastern Canada, it stretches 400 kilometres from Edmunston to Saint John. With only four days to travel, we did a route from Florenceville-Bristol to Saint John, reluctantly leaving architectural gems like the recently restored C.P.R. Station in Edmunston and the Victoria County Court House in Perth-Andover for another journey.

The french fry capital of the world, Florenceville-Bristol is the home of the McCain family, founders of a billion dollar food processing empire. We arrived in town in time to walk the riverside boardwalk and visit the Laura and Andrew McCain Art Gallery, where we fell in love with some unique, wood-fired ceramics by Lee and Yolanda Clark. Just down the street we discovered the Clark's studio in an old church. "Let the architour begin," I announced happily, leading the way into our first heritage structure.

From there we drove a few kilometres along the river to the Shogomoc Historic Railway Site, where we had dinner at Fresh Fine Dining, an intimate restaurant housed in a 1930s Canadian Pacific railcar. Ensconced in a private dining booth below a curved oak sleeping berth, we could see the lights of the site's restored 1914 C.P.R. train station and hear the contented murmur of conversation from other stationary travelers. For almost four hours we took a sentimental journey, accompanied by attentive service and inspired dishes prepared from fresh, local ingredients.

After dinner the route to Tannaghtyn B&B took us past Riverside Park. Once the site of an old mill, today it's the venue for the weekly market. Thanks to the cultural diversity of workers at McCain's Global Technology Centre, these days the market is a multicultural offering of everything from samosas to empinadas.

We crossed the Old Florenceville Bridge and wound our way uphill to Riverside Drive, known affectionately by locals as McCain Road. Once a McCain residence, Tannaghtyn is a contemporary house built on 12 acres overlooking the St. John River. In aspect and attention to detail, this executive B&B is fit for a king-or at least for a McCain.

The following morning we followed route 105 along the river to Hartland, where we stopped at a lay-by to peer through the fog at the longest covered bridge in the world. Unwilling to wait for the government to construct a bridge in Hartland, in 1901 a private company built the 1282-foot Hartland Covered Bridge. Tolls charged by the Hartland Bridge Company ceased a few years later when the government took over the operation.

At Junction 585 we crossed the river to Woodstock, New Brunswick's first incorporated town. Situated on the banks of the St. John and the Meduxnekeag rivers, Woodstock boasts a surprising collection of 19th century houses, churches and civic buildings-just the ticket for two architourists. Our first stop was the L.P. Fisher Public Library, a 1914 Greek Revival structure funded posthumously by Woodstock's first mayor. From the carved stone book that sits open above the building's entrance to the rich Honduran mahogany millwork in the interior, this building is a monument both to higher learning and to the important position that Woodstock once held on the 'road' to Canada.

After a snack at a funky café called Fusion, we were off to the Connell House an 1840's Greek Revival structure that sits in distinct contrast to neighbouring Victorians. Now a National Historic site housing the Carleton County Historical Society museum and archives, this was the former home of Charles Connell, a reform politician who made his money in the timber trade. As the Postmaster General for New Brunswick, Connell made a career-changing mistake when he bucked tradition and put his own picture on a five-cent stamp. This perceived slight to the Queen resulted in the removal of both Connell and his stamps from the post office. 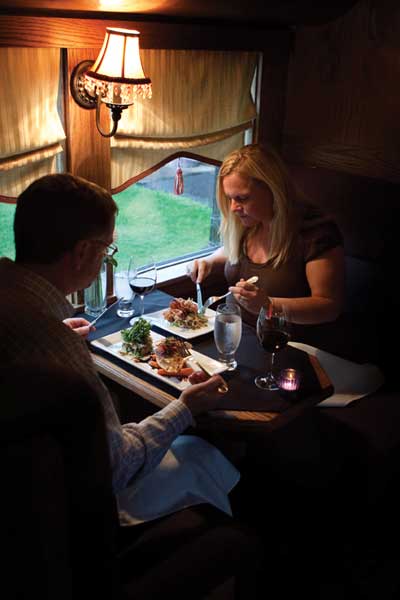 From there we drove a few kilometres to the Old Carleton County Court House. Once the hot spot for trials and political meetings, this was also the setting of an 1848 trial on a riot that broke out the previous summer-at the peak of Irish immigration-when a march staged by Irish Catholics collided with a group of Orangemen. In 1909 a new courthouse opened and after 76 years as the seat of justice this grand Georgian edifice was used as a stable until the Carleton County Historical Society began an ambitious 26-year restoration plan in 1960.

All work and no play can make architourists dull, so at that point we interrupted our pursuit of built heritage to walk the Greenway, a trail that leads to the Meduxnekeag Valley Nature Preserve. After a peaceful hike through an old Appalachian forest we returned to central Woodstock for a walking tour through the old residential neighbourhood. Many of the houses here follow a unique building style distinguished by something called an "ell", a long narrow connection between the house and the barn behind it. At definite odds with this pattern is the unusual single house built in the style of Frank Lloyd Wright.

Next was a delightful meal at Simply Dining, a downtown Woodstock restaurant that combines pizza-parlour casual décor with a mile-long menu of interesting options like Moroccan chicken. After dinner we checked in to the Bennett House, a grand Victorian structure built in 1878 as a rectory. The Bennett House passed through a number of hands before becoming an RCMP Garrison from 1920 until 1935. Today this designated historic property is once again an attractive "painted lady". Notable architectural details include a floor to ceiling leaded glass bookcase that came from the Connell House and a grand total of 104 external cornice brackets, ornamental projections that seem to support the roof and other over hangs.

The next day we continued along the River Valley Scenic Drive to Fredericton, where we took one of the city's innovative new audio tours, self-paced introductions to the stories behind the Capital Region's heritage buildings. We borrowed a hand-held listening device from the Fredericton Public Library, but you can also download the tours in mp3 format from the Fredericton Heritage Trust website. Audio tours are the ideal way to really see a city. Walk, bike or drive at your own pace and when it's time for a break just press the pause button.

We began our east end tour at the Charlotte Street Arts Centre, designed by Halifax architect J. C. Dumaresq and H. H. Mott of Saint John. The city's oldest remaining school building, it was built in 1884 for $15,000, a cost that included the price of the land and construction of two outhouses. From there we continued past other remarkable heritage structures to Christ Church Cathedral which began construction in 1845 and officially opened in 1853. Fine woodworking and expressive stained glass distinguish one of the first cathedrals in North America to be built in the Gothic Revival style.

After pausing at the cathedral we let the listening device lead us past many significant buildings, some made more memorable for me by their colourful histories-like the tragic story of the Jewett House, built in 1897 on Secretary Lane by Albert Wesley Edgecombe, a prosperous retailer who died suddenly at the age of 49, when he mistook a glass of silverware cleaner for water. Or the Old York County Gaol, designed by architect Colonel John E. Woolford and completed in 1843 at a cost of over 2000 pound sterling. Once known affectionately by the inmates as Granite Hall, the old stone jail was the site of the last hanging in Fredericton in 1949. Today the structure is home to Science East Museum.

After a stroll through the historic Garrison District we returned our listening devices to the library and sampled some of the global cuisine at the innovative Blue Door restaurant. Back in the car we followed the Lower River Passage to the Bay of Fundy, passing through Gagetown, where steam boats once stopped for the night. After Gagetown the river widens at Long Island Marsh, opening to Central Hampstead's scenic intervales, narrow strips of farmland that intersect the river. Once past the George Slipp Greenwing Legacy Marsh it was a short drive to a unique, octagonal tabernacle constructed in 1897 at Beulah Camp, an 85-acre church camp on the banks of the St. John River.

From there we followed the river to Saint John, one of the most modern cities in Canada in the 1880s. Our first stop was the Carnegie Building, a 1904 Beaux-Arts treasure that now houses the Saint John Arts Centre. Formerly home to one of Canada's oldest public libraries, the Carnegie Building was a gift to the city from philanthropist Andrew Carnegie. Flanked by gigantic columns, the raised entrance is symbolic of Carnegie's belief that people could elevate themselves through reading.

From the Carnegie Building we took a guided walking tour of some hardy heritage buildings that survived the Great Fire of 1877. Still colourful despite neglect, the 1860s "jellybean buildings" at 7 to 19 Wellington have a typical Second Empire style, with sophisticated window and door surrounds. A short walk one way leads to a synagogue residing in an 1880 neo-Gothic brick church designed by Saint John architect David E. Dunham. Walk the other way and discover an intact 1817 Loyalist house at 120 Union Street, and across the road at 109 Union the Gillis Residence, an 1860s Greek Revival building that's fronted by an elegant white porch.

Next on our itinerary was dinner at Opera Bistro, located on Prince William Street in CenterBeam Place, a restored harbourfront block consisting of 12 connected properties dating from the 1870s. Selected by Enroute magazine as one of 25 restaurants to watch in Canada, Opera Bistro's exposed brick walls are a visual link to 19th century Saint John.

After dinner we detoured past the City Market, where hand-hewn timbers support a roof resembling the inverted keel of a ship, and drove uphill to Homeport B&B, twin Italianate mansions built in 1858 by a shipbuilding family whose boat yard was located a few hundred yards below on tidal flats of the harbour. Architectural details include two magnificent curved staircases, ornate woodwork and a pair of 150-year old carved figureheads.

From our suite overlooking the water we could see the lights of the harbour, and the stack of the ferry we would take the next morning after breakfast. Pulling from the ferry terminal on the Princess of Acadia it was easy to understand the importance of the majestic St. John River as a connection to the Atlantic, and as a sacred trade and travel route for New Brunswick's first people. Their seasonal habitations now exist in memory alone, but other structures remain and for all manner of tourists they provide a vital sense of continuity with our colourful past. 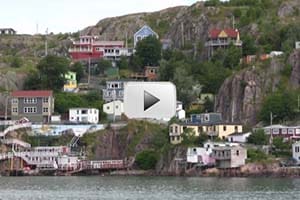 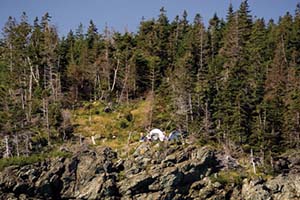 Have We Got Islands?

Saint-Pierre was a site for settlement by the French in the early 17th century, later abandoned under the Treaty of Utrecht, and returned to France in 1763 at the end of the Seven Years War. As... 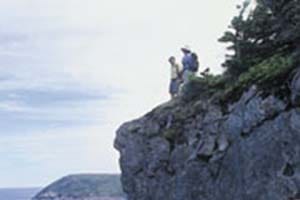 The entire trail is 540 km, from Topsail to Trepassey around the Avalon Peninsula, providing hikers with paths ranging from easy rambles to wilderness adventures.