It’s hard to escape the shadow of 9/11 when visiting Gander International Airport. Plaques of commemoration and gratitude hold a special place on a granite-like monolith in the entrance hall. Against a wall, almost hidden from sight, sits a rusted and misshapen piece of one of the Twin Towers. Despite its unassertive surroundings, a ball cap-wearing young man striding purposefully through the terminal pauses for a moment to view the twisted steel before hurrying into the arrivals lounge.

A photograph shows the lines of jumbo jets neatly positioned on the runways—38 commercial planes loaded with passengers suddenly diverted from their destinations with no idea how long they’d be stranded in a place most of them had never heard of, as well as four military aircraft.

But Gander Airport, although it once again became internationally famous on that fateful day, is much more than a landing spot in the face of tragedy. Its storied history stretches back to 1935 when planes travelling between North America and Europe couldn’t make it all the way across the Atlantic without stopping on the way to refuel. An international consortium of special interest groups met in Montreal and chose the site that would become the hub of burgeoning air traffic between the two continents.

The town of Gander didn’t actually exist back then, but the location had three important attributes: it was on the rail line, it was near a lake (to facilitate the landing of sea planes, thought by some at the time to be the way of the future) and it was flat enough to build a runway on. Its position inland also meant it was less susceptible to unpredictable maritime weather conditions.

Not knowing what the future would hold, they built their runways long and wide. Eventually, Gander Airport (or Newfoundland Airport as it was known then, since it was the only airport in the Dominion), had more tarmac than anywhere else in the world. The first plane landed at Gander on January 11, 1938.

While initially conceived of as a commercial venture, world events dictated a different path for the fledgling airport. The outbreak of the Second World War and, more specifically, the Battle of Britain left that country in desperate straits, its air force virtually in ruins. They needed planes and they needed them yesterday to stave off what was thought to be an imminent invasion. Domestic supply couldn’t begin to compete with demand. Canada and the United States were willing to produce the required inventory, but how were they to get them across the ocean? German U-boats were wreaking havoc and though troop ships took their chances (and suffered heavy losses) no one wanted to risk precious planes on the treacherous seas.

Then Lord Beaverbrook, Winston Churchill’s minister of aircraft production, came up with the idea of flying the planes across the Atlantic. It was, on the surface, a crazy idea. Fewer than 100 aircraft at this point had attempted the crossing and even though all crossings had taken place under optimal weather conditions in the summer, only half of them had succeeded. Nonetheless, the situation was desperate. The first contingent of seven Lockheed Hudsons set off from Gander on November 10, 1940. Though they became separated, the entire group eventually made it across. Ferry Command was born.

Over the course of the war, more than 9,000 aircraft were delivered to Britain from Gander. The record was 152 planes in a single day, lined up for takeoff one after another. There were 10,000 people stationed at the airport, civilians and military members of the three allied nations, RAF, RCAF and US Air Force.

Churchill called it the largest aircraft carrier in the world and Hitler issued an order that it was to be destroyed at any cost. Security was tight. The entire area was surrounded by barbed wire, everyone needed ID and without a special permit, train passengers weren’t even allowed to disembark at the Gander station. Commercial planes flying overhead had to lower the blinds so passengers couldn’t take note of landmarks in the area.

But, with the end of the war, everything changed. The military personnel disappeared like leaves on the wind and a new era for the biggest airport in the world began. Commercial airlines flocked in to fill the void left by the military and by the 1950s the transatlantic route through Gander was the busiest in the world. Every year 13,000 aircraft and 250,000 passengers descended on the bustling airport, stretching its resources to the bursting point.

A brand new terminal was opened in 1959 by Queen Elizabeth. She was hardly the only famous person to visit the state-of-the-art facilities. The security precautions of the war years were a thing of the past. Gander locals would flock to the airport whenever word got out of a celebrity sighting. Elvis Presley, Marilyn Monroe, Elizabeth Taylor and a host of others posed for pictures with fans. The Beatles landed in Gander on their first trip to North America. Fidel Castro, enchanted with the snow, took his bodyguards tobogganing with local children. Frank Sinatra was told to get in line when he tried to push his way up to the bar. The bar itself, called The Big Dipper, was the only one in Canada open 24 hours a day, seven days a week.

And it wasn’t just the bar that made the airport special. Designers were encouraged to go all out and they rose to the challenge. Marble floors, custom designed lounge chairs, a mural stretching across one wall that took the yolks of 3,000 eggs to temper the paint, even a new-fangled escalator—the first in the province, all were designed to impress the world coming to Gander’s doorstep.

Alas, just as the Second World War had sent the airport spinning in a completely new direction, so too did the eventual domination of jet aircraft in commercial aviation. Modern planes had no need to stop for refueling before crossing the Atlantic and Gander’s position as the “crossroads of the world” was lost. It managed to keep going by servicing military aircraft and it also served as a refueling stop for the massive planes that routinely flew between Eastern Bloc countries and Havana. If the heat of the Second World War launched its spectacular growth it was the Cold War that kept it going. After the Cold War warmed up people couldn’t help wondering if the huge airport with its enormous runways but few visitors could survive.

Yet even without the enormous numbers of planes landing, Gander continued to play an important and historical role in aviation. All cold weather testing of the Concorde took place at Gander over a two-year period and the airport was an alternative landing site for all the space shuttles. Military planes and private jets, which still need refueling before facing the Atlantic crossing, keep the runways operational, if not exactly busy. And all planes flying across the Atlantic are under the control of Gander Air traffic controllers, whether they land or not. It was these air traffic controllers who were in charge of deciding what would happen to the approximately 1,000 planes heading west to North America that were abruptly denied entry to American airspace on September 11, 2001.

Nonetheless as CEO Reg Wright explains, “We have this vast, historical, beautiful airport and it’s very much overbuilt and outdated. It costs $1.2 million to keep the building lit and heated every year and some systems are better suited to the Smithsonian than an airport.”

A few years ago, it seemed doomed, but once again fate seems to have taken an interest in Gander airport. Maybe it’s all the attention its role during 9/11 garnered, which is gaining renewed traction with the Tony award-winning Broadway production Come From Away and the recently announced movie adaptation. Maybe it’s simply a desire on the part of the right people in the right place at the right time to celebrate rather than destroy such a historical spot.

In any case, Wright insists that the famed Gander departure lounge, recently slated for demolition so that the terminal could be replaced with a more modest and appropriately sized building, will be preserved and once more put to use, this time as a domestic lounge.

Lufthansa recently named one of its new aircraft the Gander/Halifax. There’s a bridge in Tennessee, a crater on Mars, even a species of monkey, named after Gander. And if that isn’t fame enough, a space ship on Star Trek was named the Gander. But all of these accolades are secondary to Gander’s real importance.

Every year 300,000 airliners draw a circle around Gander on their map. They know that if there’s a problem they have a safe haven where they can land. Upwards of 100 do so annually for reasons varying from an unruly or ill passenger to engine problems or simply bad weather at their destination. The airport is always ready to receive them. “You go to work and cross your fingers,” says Wright. “Air travelling is inherently safe, but for everyone in aviation the potential for something is always front and centre.” 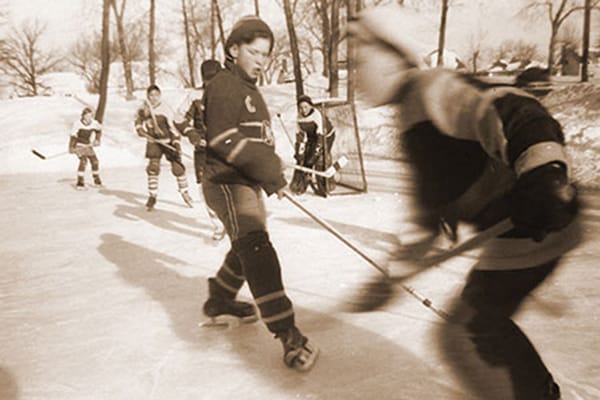 LIKE COUNTLESS generations of young boys, I first played hockey on ice that never knew a Zamboni’s wheel. Ice was a mysterious magical surface that transferred mere youth into hockey titans—once it... 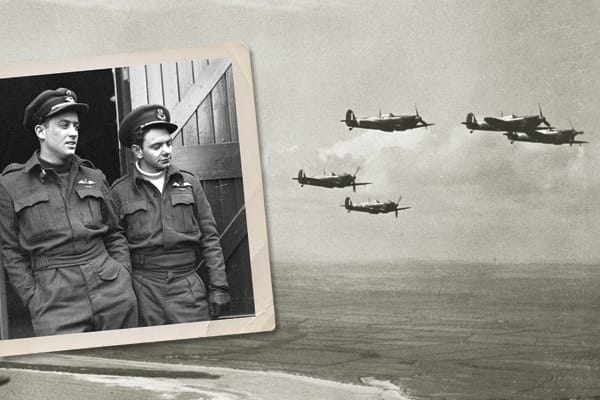 As many a veteran has observed after a visit to the cemeteries in Normandy, “It’s hard to believe we were that young.” Yesterday’s heroes. Faded photographs and fading memories.