Remembrances of Christmas past, and hope for Christmas future

In more than 20 years of writing Christmas stories, I’ve only turned one of the many suggestions I received into words. This occurred four years ago when my husband Ron suggested I write the story of iconic Maritime entertainer Charlie Chamberlain’s Yuletide benevolence for Saltscapes. This year I encountered a second suggestion I couldn’t ignore. It came from my daughter Carol.

“It’s time,” she said firmly. “It’s time to write about Dad and how he loved and celebrated Christmas.”

She’d held back the idea until this year. She’d known her father’s passing in September 2016 had previously been too glaringly fresh and painful. But now, enough months had slipped by. The time had come to celebrate his joy in the festive season.

In the early years of our marriage, Ron and I shared our pleasure in the Yuletide by making certain Santa provided as much as possible from the lists of three bright-eyed, expectant children. It was only later, when they’d gone off to university that Ron branched out into his own unique Christmas interests.

Each year, as soon as ornaments and other gewgaws of the Christmas season began to appear in stores, he’d set out on forays to discover what was new and interesting. I can trace his delight in such ornaments back to the years when he began to sell Christmas trees as a hobby. He’d watched people perusing trees on city lots and noticed that many of them ended up not making a purchase because they had no means of transporting the greenery. The light bulb of an idea snapped on in Ron’s mind. Why not start a Christmas tree retail business with home delivery included in the price?

At that time, such a service didn’t exist in our area. Ron set about to fill the need. He purchased trees from commercial growers and brought them to our front lawn. People came and chose the one they wanted. Later, he delivered it to their home with his Ford Ranger. For people not wanting to mess up their vehicles with scratches and needles, this was indeed a terrific idea. He soon had a thriving business.

Another reason for his success resulted from his careful selection of the trees he chose for sale. Extremely critical of each and every one, he amused the children and me no end with his diligence. Prior to his getting into the tree business, we’d always had what we termed “Charlie Brown Christmas trees,” sad little firs he’d smuggled out from deep in the woods with barely enough branches to support our meager supply of lights and ornaments.

Ron also proved to be a voracious salesman, eager to satisfy his customers. He’d spend long hours out in the cold while super picky buyers examined each and every tree before making a selection…quite often the first one he’d shown them.

“It’s a tree, for God’s sake!” exasperated son Steve exclaimed one bitterly cold evening as we watched from a window as Ron held up tree after tree for a woman buyer’s inspection. “I wonder how long it takes her to buy a car.”

One year Ron’s enthusiasm to make a sale got the better of him. When a woman came begging for a delivered tree two days before Christmas, he sold her the last one in our yard…the one intended for us. Annoyance billowed over me as I watched him drive off with it. Really! We’d been planning on decorating that tree in the evening.

An hour later he was back, branches showing above the sides of the cargo space of his truck.

“She didn’t take it?” I asked as he walked past me into the house.

“She did.” He had the good grace to look slightly sheepish as he pulled off his jacket and hung it in the closet. “I had to buy one for us.”

When he brought his purchase into the house later that day, I heaved a sigh. Most likely the last remaining tree on some seller’s lot, it took me back to our Christmases of Charlie Brown foliage. “Oh, well,” I comforted myself as we straightened the poor, scraggly thing in a stand, “those had been happy days filled with joyous children, tangled wrapping paper, and good cheer.” Like Charlie Chamberlain who’d generously given away the family tree, then miraculously found another on Christmas Eve, Ron wasn’t about to let his family go without the proper form of seasonal adornment.

When the kids saw it, instead of being disappointed, their expressions brightened.

“Just like the ones we used to know,” daughter Joan chuckled as she quoted Irving Berlin.

Tree sales weren’t the only way Ron celebrated the season. He loved to decorate outdoors. One autumn he discovered an illustration of a pair of Disney-type reindeer in a magazine. He’d always enjoying photographing live deer, so it wasn’t surprising he’d fall in love with these soft-eyed imitations. Immediately he decided he needed replicas as Christmas decorations to place on our front lawn. But how?

A recently retired teacher, he suddenly remembered a classroom aid—an overhead projector—and how it could be used to make enlarged images on flat surfaces. He persuaded our daughter, a grade seven teacher, to allow him access to her classroom and equipment for a Sunday afternoon. The result appeared as a five-foot outline on paper of one of the deer. On Monday, he began to transfer this image to a sheet of plywood. Within a week he had a pair of reindeer cut out and ready to enhance.

For days he laboured with nearly a dozen cans of various colors of paint in the corner of our basement. He was meticulous in his desire to have his creations just right.

The consequence of his labours appeared in the first week of December when he installed a pair of delightful reindeer on our lawn. I believe they would have been a welcome addition to any Disney resort. These adorable creatures would be the centre piece of the Christmas display in our front yard for the next twenty years.

Each following December, Ron spent long hours in freezing temperatures, placing them dead centre in the lawn, securing them with steel spikes that no winter wind could uproot, arranging spotlights to shine on them, and surrounding the pair with candy canes and other appropriate seasonal accoutrements. Our house, which formed the backdrop for this Christmas fantasy, was trimmed with lights and wreathes. At night, after a fresh snowfall, it became a winter wonderland. On December 3rd of 2000, Ron underwent heart surgery. He had a quadruple bypass and returned home three days later, determined to lick this problem that he perceived as merely putting a kink in his usual Yuletide activities. With his dog, he walked around our subdivision daily, undeterred by icy streets, hugging his heart pillow to his chest, regaining his strength and stamina. His behavior didn’t surprise me. This was simply typical of his spirit.

He did manage to astonish me four days before Christmas when I discovered him pulling those plywood reindeer from the shed. I started to intervene, but the stubborn resolve in his eyes stopped me. I walked away. Surely he couldn’t accomplish much in the way of decorations in his condition.

I underestimated him…as I had so often over the years of our marriage. He enlisted Carol and Steve to do the heavy work while he strode about the lawn, issuing orders like the most demanding of construction foremen. Shortly our home once again stood out in the neighbourhood, decorated, as previously, with the deer once more back in the floodlights. “Now it’s time to go shopping,” he said as he reentered the house, brushing snow from his coat. “You’ll have to drive me to Sobeys.” Still under doctor’s orders not to operate a motor vehicle, he was forced to seek my assistance.

I saw no point in protesting. He’d survived the house decorating. Surely a trip to the local supermarket couldn’t be more dangerous. Furthermore, I knew if I didn’t agree to take him, he’d find someone who would. It would be safer if I remained somewhat in control of the situation.

This shopping trip was a major part of Ron’s Christmas traditions. Each year, after the lawn had been trimmed to his satisfaction, he’d set off on the buying mission that proved the icing on his seasonal cake of enjoyment: a quest for the perfect boxes of chocolates and Ganong chicken bones for the family. By the time Christmas Eve arrived, he had a fitting display of carefully chosen goodies and could expound on the reason for every choice. We enjoyed listening. He’d put such thought and care into each selection. Not even major heart surgery could cast a shadow over this custom.

In January of 2016, he stored the reindeer in the shed. He put new red bows around their necks in anticipation of the following Yuletide. But as Robert Burns once wrote,

“The best laid schemes of Mice and Men

An’ lea’e us naught but grief an’ pain

In December, 2016, the deer, for the first time since their construction, remained stabled in the shed. The house was decorated with a single lighted wreath on the front door. A small, artificial tree stood in the living room. Without Ron, the joie de vivre of Christmas had vanished from our home.

I couldn’t bring myself to attempt to celebrate the season he’d enjoyed so passionately. Going into stores was a painful experience. Forgetting for a moment, I’d pick up something I thought he’d enjoy as a gift and start to add it to the purchases already in my cart. The sound of Christmas music wrenched at my heart.

Then I arrived in the candy section. The shelves were filled with a variety of chocolate. Down near the end, was a display of Ganong chicken bones. Chocolates and chicken bones. I drew a deep breath and began to add a supply of both to my cart.

Decorations might have become scant at the MacMillan house, but Ron’s memory and his love of the season will live on as long as I can provide chocolate and chicken bones. 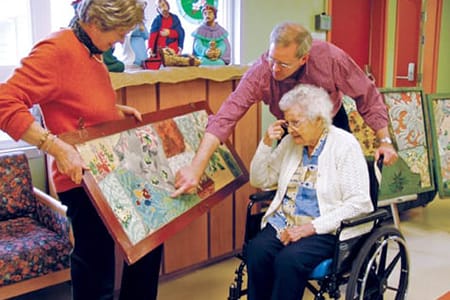 "AMAZING." An overused sentiment perhaps, but when Martine Vermeulen utters the word her eyes widen and shimmer-as if caught in some great surprise. Although Vermeulen says the word frequently, it's...

Portrait of the (botanical) artist

In Nova Scotia, she found a place where her work could truly flower

From 1951 to 1986, Ralph Wheadon worked for the Nova Scotia Department of Lands and Forests (now Natural Resources) in the former Halifax County. He measured logs on Crown land, fought fires,...