Confessions of a failed potato picker

In Carleton County, New Brunswick, where I grew up, the humble spud was king. Everyone from the storekeeper to the garage mechanic to the lady of the house knew that come early September, the potato harvest began.

News of the harvest conditions, yield results and quality was all the talk with media from radio to television to newspapers reporting daily. It even temporarily eclipsed the upcoming hockey season and that was saying something.

Farmers hired big crews to get the potato harvest in and folks from six to 60 headed into the fields. You’d think that the chance to earn a little spending money would set a fire under any farm kid, since the concept of an allowance was unheard of. It was possible to make money, but you had to be a good steady potato picker.

The job went along like this. Once the potatoes reached maturity and the green tops died down, thing got rolling. A farm tractor hauled a digger machine that went down two rows and the spuds bounced along a link belt that shook most of the dirt or rocks loose. The potatoes spilled out the back of the digger and then the picker’s job began.

The potatoes had to be put into barrels to make the trip to the storage barn. How did you get them into the barrels? Well, you picked them up by hand and put them into a basket. Not a cute picnic basket, oh no. A big basket that held several pounds of potatoes and got heavier as the day went along. You lugged the basket over and dumped it into the barrels. Simple, eh?

The first time I went picking I was nine years old, and while used to working on the family farm, I had never picked potatoes. Dad drove a potato barrel truck for a nearby farm and one autumn decided it was time I started my potato-picking career. So, on a cold dark September morning I got into the hulking barrel truck and headed for the fields. Once there, I was given a potato basket bigger than I was, a bundle of cardboard tickets to claim ownership of my barrels and shown where to pick. Now, I was a plucky little fellow and no quitter, so I figured it ought to be a snap.

Each picker was given a section of potato rows which varied from person to person according to how proficient they were. Each section was marked at both ends with a lunch pail, thermos or a stick from the fence row. A section was measured according to the number of barrels it produced. A two-barrel section was about right, but real go-getters could handle four-barrel sections. The trick to the whole job was to have your section picked clean of spuds before the digger came back up the rows because you did not want to get too far behind. Believe me, you sure didn’t want to fall behind.My first hours picking potatoes sadly foretold the future. I went up the rows chucking potatoes into the big basket and staggering over to the barrel. I was about the same height as the barrel so I had to really heave to dump the potatoes in. It was chilly, but I was hustling so the cold didn’t bother me. The other folks around me were a jolly talkative bunch. All in all, things should have gone well that first day.

You know how some folks are just born to be a great mathematician or gifted musician? Well, some folks are natural potato pickers while others aren’t. Guess which category I fell into? Yeah, I was bad. Really bad. In fact to quote the kids today, I sucked.

I left the field that first day tired and a little defeated with seven barrels to my credit. That fall the price paid per barrel was 35 cents, so the day’s take was a few cents over $2.00—and hard won, too. After supper I fell into bed and never heard a sound until breakfast.

As the harvest went by I put every ounce of nine year-old determination into picking potatoes. I ate lunch on the run and didn’t stand around talking or rolling cigarettes. The harvest weather was clear with gorgeous autumn colours, but I never noticed because I was face down in endless rows of dug-up potatoes. No matter how hard I tried, I was soon behind. And here is where being a lousy picker got you into trouble. You see, the barrels were lifted up on to the truck and rolled into place on the flatbed. Pickers set all their barrels in the same rows and left a space wider than the truck so the driver could get down through the field. This is why everyone had to stay picked up otherwise the truck had to swing out around the unpicked potato rows then jockey back in. Needless to say the truck drivers got quite animated and the air sometimes got pretty blue!

“The harvest weather was clear with gorgeous autumn colours, but I never noticed because I was face down in endless rows of dug-up potatoes. No matter how hard I tried, I was soon behind”

Since I ran out of steam in the afternoon, I would start to fall behind. Sometimes it seemed I was the only one far behind, but I’m sure it happened to other pickers. Once I was a spectacular 10 rows behind—but only once, because after that disaster I was given a kiddie section to pick. Over time I did improve slightly and the year I turned 16, some days I could pick 20 barrels. Not every day, mind you, but sometimes. Ok, not that often. Even at that number, I was still way short of other kids my age that could pick 60 barrels a day. Yes, I said 60 barrels! It took me days to pick that many. To make matters worse, I had two younger brothers, both of whom easily out-picked me and did that ever gall me. Bested by my little brothers! In the right conditions each could pick 60 barrels. I was so disgusted because everyone asked why I was so slow.

No matter how hard I worked, I just never got the hang of picking potatoes. You’d think growing up in the potato belt I’d be a natural, but I was never any good at it. Finally when I graduated high school I got a job working for a lumber company and vowed to never, ever, pick potatoes again as long as I lived.

After I got married my wife planted a vegetable garden one spring. She wanted to grow peas, corn, tomatoes and, you guessed it, potatoes! So I grudgingly helped plant a crop of spuds, kept the bugs at bay and come fall I dug them up. Then a funny thing happened. Our garden got bigger and the potato rows got longer. Eventually we began to grow enough to last until March or even April. I grew different varieties of potatoes. Yukon, Norlands, Superiors, Irish Cobbler, River John Blue and even purple potatoes.

Strangely, I enjoy growing my own crop of spuds and it seems maybe I’ve broken my vow. But if you’d told me years ago as I struggled to keep up, that someday I’d pick potatoes and enjoy it...I’d have thrown a potato at your head!

Just how do they survive?

A fleeting but momentous visit with Sable Island’s wild horses

Why is Nova Scotia the only place on earth not recovering from acid rain? 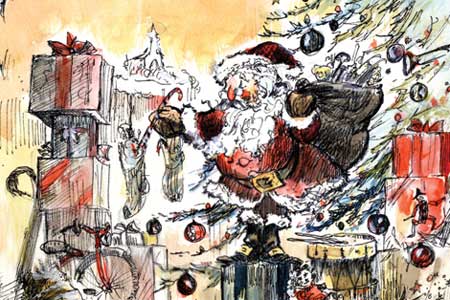 This year, I started thinking about Christmas even earlier than usual, and that's saying something because I generally start pondering it pretty early. Who can help it? I mean, we're all still...