Story and photography by Jodi DeLong

Several chickens and a handful of guinea fowl roam about their spacious run; there’s a scene of tranquility in the pasture where five Icelandic sheep casually graze. On a clothesline, numerous skeins of hand-dyed sock yarn are drying in the warm autumn sun.

Located in Clementsport, above the Moose River, which drains into the Annapolis Basin on Nova Scotia’s Fundy shore, this life is just about as far from the fast lane of downtown Calgary as you can get. Recovering Alberta urbanites, Samantha Myhre (rhymes with Meyer) and her husband David are small-scale farmers, but they’re doing it by choice. It’s a love story, in the best sense of the phrase, too.

Samantha’s background is in agricultural biotechnology, and she worked with Agriculture and Agrifood Canada doing research in water quality and antibiotic resistance in livestock production for some years. When she began a PhD in her area of interest and realized it would be tough to get a job, she opted to work in real estate, and spent the final three years of her western life in Calgary as broker of the largest ReMax brokerage in Canada.

“I tell people I used to wear high heels in downtown corporate Calgary managing 300-plus type A personalities, and now I wear rubber boots and manage five sheep, 19 chickens, four guinea fowl, two dogs and a husband—and I’m much happier!”

David also hails from Alberta but came to Nova Scotia about 20 years ago to work as a paramedic, which he continues to do from Digby’s Emergency Health Services base. A relative’s wedding took him to Calgary several years ago, and his brother introduced him to Samantha. They began corresponding once he returned to Nova Scotia, and met again when he invited her as a date to a wedding, she says, “The moment I got off the plane and into the rental car, I knew this was home.”

As their relationship blossomed, Samantha asked David to find a house for her, a place where she could retire—in five to 10 years. He found the perfect property in Clementsport, with a well-built house—a former Anglican manse—along with a couple acres of land. When she came to see it, he asked her to marry him.

“It turned out that every time I came here to visit after that, this was home and I wanted to be here,” she says firmly. “So, I quit my job in Calgary… and then had to figure out how to make money so we could have our life here, together.”

The beginning of RavensWood

Serendipity is a wonderful thing. More than a decade ago, Samantha used to dye yarn as a hobby, and sell the yarn online to ardent fibre enthusiasts all over. There was no reason she couldn’t do that in rural Nova Scotia at an increased scale. “This became my do-over,” she says happily. “I got to do what I wanted to do, and I wanted to be a yarn dyer—and to have chickens, and maybe goats—but ultimately, we decided on sheep instead.” From one orphaned Icelandic lamb that needed bottle feeding and that captured Samantha’s heart, they now have a small flock of five, with one ram and four ewes.

Icelandic sheep were first brought into Canada in 1985 and the breed is still genetically the same as it was 1,100 years ago. It is thought to be the oldest and most genetically pure breed of sheep in the world today. Samantha waxes eloquently about the them. “Icelandic sheep produce beautiful wool which is double-coated, and they’re sheared twice a year. They have beautiful meat which is sweet and not gamy, and they produce a lot of rich milk, so I will be trying my hand at milking and making cheese for our personal consumption.”

Icelandics are also sturdy, easy to work with and, although lambs are small, they put on weight and grow quickly with their mother’s milk. The first year, ewes generally produce only one lamb, but in future breedings they routinely have twins and triplets. It won’t take long to build up a sizeable flock. Selling lamb at the farm gate will augment the income from the yarn dyeing, and the current year’s fleeces will be woven into blankets.

Obviously, five sheep cannot produce enough fibre for the more than 3,200 skeins of yarn Samantha and David will dye this year. For now, Samantha starts with yarns milled out of Britain—merino blends that are beautiful to work with. The fibre company has two streams of income: the commercial or wholesale stream with a number of shops that order specific colour combinations from RavensWood, (and which are only available in those shops), and the whimsical, often one-of-a-kind creations that Samantha sells from her home, from the Annapolis Royal Farmers Market during the summer season, and from her Etsy (online site for hand-made articles) store online. With yarns that average more than $25 per 400-plus yards single skein, it’s a decent income. Initially, David and Samantha weren’t sure that they would qualify as a farm, but they quickly learned that in Nova Scotia, it’s not the acreage that makes a farm, but the productivity, or gross farm income.

Now nearing their fourth year of operation, the business has grown steadily each year, but it’s still something that just the two of them handle, with a little social media help from Samantha’s son, Tyler Burgess, who is still in Alberta. They can expand more with just this core team, although David’s work as a paramedic does keep him from being available each day.

The art of dyeing

The last 15 or so years has seen a huge spike in interest in the fibre arts all over the world—spinning, weaving, knitting, felting, rug-hooking, among other activities—and the demand for quality yarns has grown with that interest. There are numerous fibre festivals throughout our region, and readers will remember the review of the best-selling Newfoundland book Saltwater Mittens from several issues ago, just as two examples. Custom-dyed yarns are sought after, and there are a number of such skilled dyers in every province in Atlantic Canada (and beyond).

Samantha uses chemical dyes to create her yarns and explains her thought process. “I believe in conserving our water resource, and when you work with natural dyes, you often have to use mordants like lye, for example, and I don’t like to put that into our water system. It’s also really difficult to exhaust the dyes or use up ever molecule in the water bath.” The chemical dyes stick perfectly to the yarn if you do it right, and nothing ends up going down the sink except a little vinegar and water. Generally, both Samantha and David work together on dyeing—he does the heat-setting part, so he does the cooking and rinsing, while she creates the breathtakingly beautiful colourways.

It’s a little like magic to watch the process. The equipment they use is a hot-water bath like you would find on a buffet line in a restaurant. Up to six skeins go in the bath, lined up side-by-side like reams of spaghetti noodles, and then Samantha adds the various dye colours in a particular pattern. They don’t all swirl together as you might expect but are drawn into the yarn as if by magnets. She will turn the skeins to make sure they’re getting good colour uptake, and when I look in the basin, most of the water is nearly clear.

Once rinsed, the skeins go out on the clothesline, and when dry they are all photographed, each colourway is named— with names ranging from fairly descriptive like Sea Breeze, Northern Lights and Cherry Blossom to more whimsical (and often hilarious) titles like No Monsters under My Bed, Tossing Spring to the Wind, and Zombie Eyes—and then posted to the Etsy shop. Sales on the shop offer free shipping, which the Myhres do by vacuum-sealing their parcels to make them flat and able to pass as a small packet. There’s a nice personal note included with each skein, and the package bears a label that reads, “In case of yarn emergency, break seal.”

When you have a small farm, almost everything gets done by hand, as it’s hard to justify the expense of a tractor for fencing or building structures. Both the chicken coop and the sheep barn are labours of love, aesthetically pleasing as well as functional, comfortable and clean. All the livestock goes indoors at night, and although the animals are all named (except the guinea fowl, which act as raucous watch-birds and are skittish and seem lacking intelligence), the Myhres are both practical  and caring about their animals.

Samantha says, “My job is to keep the chickens happy and safe, and their job is to feed me—it’s part of the custodianship, and part of that is keeping them clean, too.” She warms to her notion that anyone wanting to farm should start with chickens. “They do fly the coop, there is a pecking order, and definitely you ought never count your chickens before they hatch, and we won’t discuss the fox in the henhouse,” she says. “We’ve had some chicken theatrics here—sometimes with different breeds, it’s a little like West Side Story—but we laugh every single day, at things we are learning, or things the animals are doing.”

Watching David in the pasture with Guinness the ram as he checks the fence lines, Samantha adds, “We stand on our deck, and can’t believe we get to live and work here. The ocean calls to me here. It’s home. I can’t wait to get home when I’m away, and I consider myself a come-from-away-Maritimer. I know I’ll never be anything but a CFA to some…but this is home.” 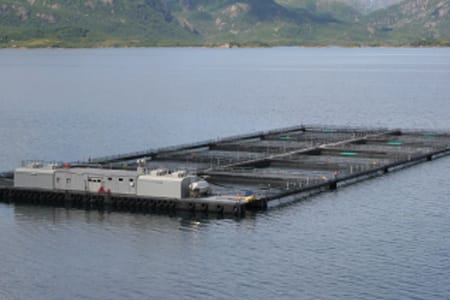 Inside a sea cage at Kelly's Cove off Deer Island, in New Brunswick's Bay of Fundy, swim the fish that some believe could save the Atlantic fishery. The cage belongs to Cooke Aquaculture, Atlantic... 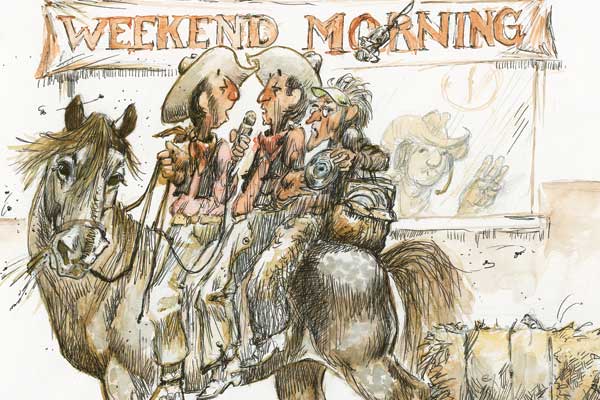 It's Saturday, 6:05 a.m. Boing! My internal alarm clock kicks in. My sleepy arm reaches out, clicks on the radio and the cheerful voice of Stan Carew shifts into my consciousness. Weekend... 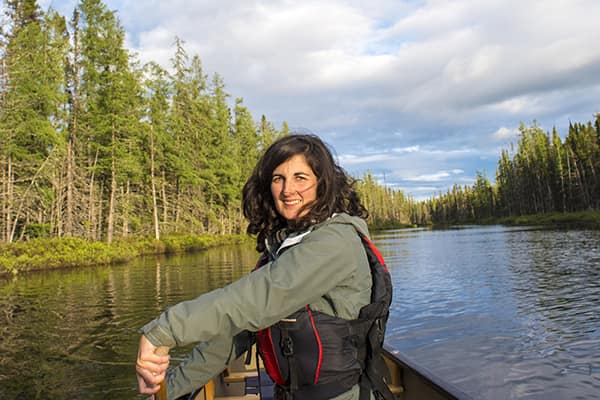 The gem that is the Restigouche River

Three years ago this summer, our so-called “Restigouche Expeditionary Force” pushed off from a riverbank in northern New Brunswick for the first time. We had three days of canoeing and outback...