Just because the Beaton brothers liked horses, didn’t mean they all expected to have life-long connections to harness racing. Life, and the sport itself, however, seemed to have other ideas for John William, Donald Francis, and Anthony.

There was just something about the camaraderie of a Standardbred horse barn, the animals themselves, glossy-coated and even-tempered, and the high voltage of competition at the Inverness, NS race track that the three boys from small town Cape Breton couldn’t resist. As years went on, one became a driver, and two became owners and trainers. Then the adventures really began.

Harness racing has been a colourful part of life in the Maritimes for more than 150 years, and is popular around the world. Standardbred horses were first developed in the United States in the 19th century. They are used to draw “sulkies,” or two-wheeled carts, while their drivers skillfully guide them down mostly half-mile or one-mile tracks. The horses are either “pacers,” who move their legs laterally (right front and right hind together, then left front and left hind), or “trotters,” who move their legs forward in diagonal pairs (right front and left hind, then left front and right hind).

Descended from Thoroughbreds, Standardbreds are now a separate breed. Bays, browns, and blacks are most common. The breed also includes chestnuts, grays and roans. They are named “Standardbred” because in early years, only horses who could trot or pace a mile in a standard time of no more than two minutes, 30 seconds, were admitted to the stallion shed.

In 2008, the world record for three-year-old pacers was set by Canadian-bred champion pacer, Somebeachsomewhere, at The Red Mile, in Lexington, Kentucky, with a time of 1:46.4.  The record still stands.

For the Beaton boys, growing up in Port Hood, population 800, learning about harness racing of course meant going to their local racetrack.

“I used to go to the Inverness track as a boy,” says John Willy. “I loved being around the horses.” At 64, the wiry man with the big smile is the oldest of the brothers, in a family of three brothers and five sisters. “Then, after high school, I got my licence to drive horses in Saint John, and started working at Callie Rankin’s barn there, warming up his horses.”

“J.W.,” as he is known to many, went to Saint John to work in construction, later specializing in the preparation for masonry work. He does this still, in Sydney. His profession, along with driving horses behind a sulky, or “bike,” has kept him fit and strong. He was inducted into the Cape Breton Horsemen’s Hall of Fame in February this year.

J.W. drives at the Northside Downs race track in North Sydney which, like most in the region, operates May through November each year. He is married to Kim Beaton, a horse show judge and equestrian. Up until 2016, they owned their own Standardbred racehorses and kept them on their farm in Sydney River. They now own two Morgan horses, one quarter horse, and two miniature horses, Boomer and Ruby, that Kim shows in harness.

Back in the home territory of Port Hood, younger brother Donald Francis, “D.F.”, or “DFer,” as family call him, also recalls going to the Inverness Raceway, with his father.

“It all snowballed from there,” says D.F., who is the owner of the D.F. Beaton Service Station. D.F. has also been the town’s fire chief for 20 years. Like his older brother, the 61-year-old refers to his passion for Standardbred racing as a “hobby.”

But one look at his “wall of fame” in the reception area of his service station, and a visitor will see just how consuming a hobby it is, and how successful D.F.’s horses have been during the 30 years he’s been involved with harness racing. On display are dozens of photographs of horses, drivers, and winner’s circles crowded with beaming friends and family.

“As it turns out, 2019, was our best year yet,” says D.F., who is married to Margie Beaton and has two sons, Tristan and Leander. “We had 35 wins altogether, at Truro, Charlottetown, Summerside, North Sydney, Inverness, and in Edmonton.”

D.F. bought his first racehorse in 1999, when he was 40 years old. He has owned 24 since then. He currently owns four horses and co-owns one horse with his nephew, Adam Pond, and one with his younger son, Leander. Five of his horses are stabled at his own barn, Beaton Racing, near the Port Hood Irish Road Horsemen’s Club, and the sixth, Last One Standing, his first trotter, is in Ontario, with youngest brother Anthony.

Anthony (or “Tony,” as he is to some) Beaton, 44, lives in Waterdown, Ontario. He, too, spent his boyhood in the barns around Port Hood and Sydney River, and at the track at Inverness.

“Our dad went to the races every Sunday, faithfully,” says Anthony. “I started hanging around at J.W.’s in the summer, all through high school. I liked being around the horses, and J.W. and Kim liked the help.”

In 1998, Anthony, along with five friends, bought his first horse. Not long after, Anthony bought a second horse, Chestico Charlie, from BC. (“Chestico” is the Mi’kmaq word for the Port Hood area, which also hosts a yearly summer festival, called Chestico Days.)

“He was a very good horse for us. We raced him in Inverness, Sydney, and PEI. J.W. drove him.”

Since then, Anthony has worked for a number of respected horsemen and women, including 10 years with the legendary trainer Casie Coleman, based in Cambridge, Ontario.

“That’s when we bought Vegas Vacation,” he says.

Anthony was assistant trainer and one of five co-owners of this great racehorse, who would go on to win the famous Little Brown Jug in Delaware, in 2013. Vegas Vacation also made just under $1 million in that same year, and, became the top three-year-old in Canada, winning the prestigious O’Brien Award for this.

“It was pretty amazing,” says Anthony, “to own part of such a great horse.” As exciting for Anthony and his wife, horsewoman Lisa LeFort, was keeping Vegas Vacation in the family, after he retired.

“It took time to break him to saddle,” says Anthony, “and Lisa had help, but she did a lot of the training herself, too. He has a good home. We thought he deserved it. He was very good to us.”

Now, Anthony is in his fifth year of being his own boss. He has 18 horses in his barn, named Anthony Beaton Racing.

A life with horses—marvellous, mystical creatures, but also large, powerful, and sometimes unpredictable—will always include some tough days…

But some are tougher than others.

November 12, 2016, the last day of racing for the year at Northside Downs, is carved into J.W.’s memory, and wife Kim’s.

“[Driver] Danny Campbell was on my outside,” says J.W. “He was coming on when his horse stumbled. His foot must have hooked on his gear and he fell, hard.”

Campbell tried to pull his horse back, but the horse behind hit him and drove him forward. He lost control and was flung onto the track.

Meanwhile, the two drivers behind Campbell went down, too—J.W. with his horse, Fleetwood Cam, and Roddy Hurley, with Shiny Mach.

“My bike hooked Danny’s bike and then I was catapulted. They tell me both Roddy and I were lying side by side on the track, unconscious.” All three drivers were taken by ambulance to the Cape Breton Regional Hospital.

“I was close-by, at a meeting,” says Kim Beaton. “I had a cold chill come over me just before J.W. got hurt. A sulky wheel broke all eight of his ribs, and a horse landed on Roddy.”

Incredibly, the horses came out better than the drivers did, with only bruises and leg lacerations. But of the three drivers, J.W. was the worst off.

“I ended up in a helicopter going to the Queen Elizabeth II in Halifax,” says J.W. As for treatment, he says, “No taping, nothing. Just some painkillers.” He smiles, the worst of the memories tamped down now. “I couldn’t laugh—and I love to laugh. I sneezed once and nearly screamed!”

He healed in 10 weeks or so, and never once thought to quit driving. “It’s the same as a car accident,” he says. “Are you not going to drive anymore?”

Kim supported his decision. “The accident was upsetting, of course. And I was teaching school, so it was a lot of work to look after J.W., too. But driving was what he wanted to do. It’s up to him. Same as a skiing accident, or a car—so what do you do?”

If you’re J.W. Beaton, you shrug, glad the accident happened at the end of the season, and you had lots of time to heal up.

Like his older brother, D.F. knows racing, and a love of horses is a central part of his life, which fear can’t and won’t trump. “We’re going to go as long as we can,” he says. “You take ’er stride by stride; one race at a time.”

Anthony is equally pragmatic. “Once racing gets in your blood, it’s a hard thing to shake.” Nor do you need to be involved first-hand, he says, to love the sport. “Go to the track! It’s entertaining. It’s great for families, or for anyone who wants a fun evening.”

Brent MacGrath agrees. He is one of the six co-owners of Somebeachsomewhere, who in addition to setting world records, won 20 out of 21 career races, and overall, changed the course of Standardbred racing history, which his progeny continue to do. “Beach” died unexpectedly in 2018, and is still missed terribly by fans in Canada and around the world.

“Harness racing is inviting to the neophyte,” he says, “not like the Thoroughbred world. In the harness racing world, pretty well anyone who is willing to learn can buy, care for, and race their own horse. And if you want to own a horse, you can. It’s available to anyone who wants to do it.” Just like J.W., D.F., and Anthony, says MacGrath, you can, “Get a horse and get going.”

MacGrath should know. Neither he, a car dealer from Truro, nor the other five members of Schooner Stables, the syndicate that owned Beach, ever expected to own a legend. Not when they purchased the horse collectively for the relatively modest price of $40,000.”

The Maritime provinces have eight harness racing tracks—three in New Brunswick, three in Nova Scotia, and two on Prince Edward Island. Of these, the track in Charlottetown is the best-known.

Each summer, at the conclusion of Old Home Week, an annual celebration of life on PEI, 15 racing programs take place in nine days. The last of these, the Gold Cup and Saucer, attracts 20,000 people, Islanders and visitors from around the world. Around 11:30pm, the lights at the track go out. Then the horses and their drivers are introduced to the thousands of fans one by one, under the spotlight, as they pass by the grandstand. Finally, at two minutes to midnight, the familiar call to the post rings out, and the horses and drivers ready themselves to compete. And they’re off!

Even after a lifetime of racing Standardbreds, MacGrath still enjoys the company of horses better than any other aspect of the sport. “I love being out there on the track, jogging them,” he says. “It’s the closeness with the animal I like the most, on the track, or in the barn.” 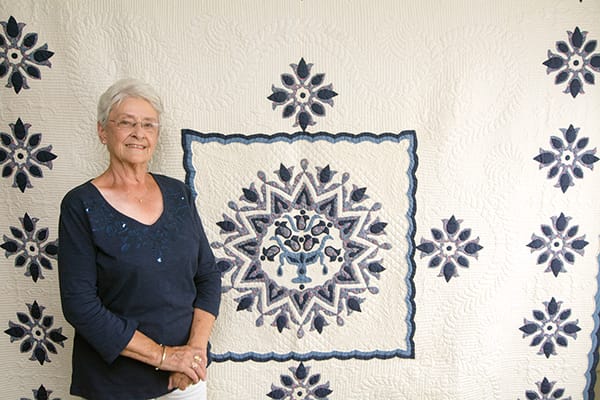 A Stitch in Time

When Joan Tufts first thought about forming a quilting group, she imagined a few friends and neighbours gathered around her kitchen table, in her home village of Grosses Coques, on the southwest coast of... 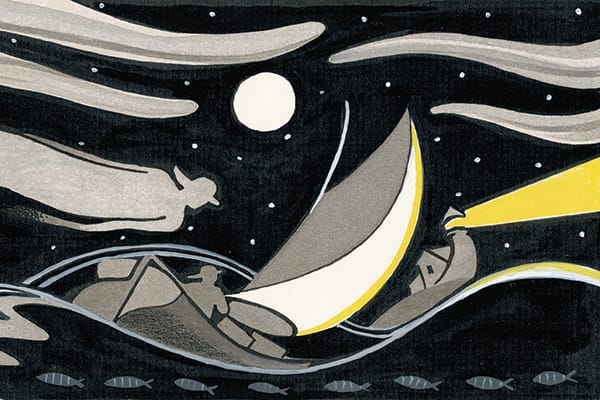