In today’s world of fruit aisles bursting with kiwis, kumquats and countless citrus choices it is difficult to image that fruit was once only a brief seasonal treat. For most people there was no apple a day, but that all changed with Francis Peabody Sharp. This largely unknown genius was responsible for the creation of countless fruit varieties and the foundations of commercial apple growing in New Brunswick.

All great achievements start somewhere and Sharp’s began in 1823 in Northampton, New Brunswick near Woodstock along the Saint John River. The son of a prosperous merchant, he ought to have followed the family business but instead settled on a very different path. One of those rare individuals who could focus all their energies on one subject, Sharp chose the apple as his life’s work with results he could never have imagined when he first began to study pomology in the 1840s.

An enthusiastic reader with a curious mind he began to search for every scrape of information on pomology then available and carefully studied horticultural principles of the day. Sharp educated himself on methods of cultivation, apple varieties grown worldwide and grafting techniques to improve fruit quality. Over time, Sharp realized that microclimates had much to do with fruit production and with this in mind he began to conduct his own experiments. These experimental trials took years and were the basis of all his future success. Painstaking documentation of each planting, the patient wait for blossoms then fruit and finally tasting—all were meticulously recorded in orderly numbered volumes. Even the soil conditions, seasonal rains, frost hardness and sun exposure of each trail were part of the process. The amount of effort and time that these methodical trails took can be astonishing to the mind of today, that expects answers and results at lighting speed.

As an example of the attention Sharp devoted to his passion, he worked out a method of forced pollination, bypassing the promiscuous bees who could bring the wrong pollen to the trees, and thereby ensuring faithful reproduction of desired traits. Sharp also was a proponent of dwarf growing methods early on, employed mathematical grid patterns to lay out orchards for maximum sun exposure and used well-rotted manure as the lone fertilizer. By these methods Sharp produced unheard-of results such as 150 barrels per acre of trees.

Every great man needs his muse and Sharp set about finding his. Reasoning that apples grown in Russia might provide the stock for his experiments he purchased seed from a dealer in Maine. By the 1850s he had trees growing and through repeatedly grafting cuttings to already-established rootstocks he developed a fine apple cultivar. Robust, excellent to eat and wisely named the New Brunswicker, it became the foundation for future experiments in propagation. Other equally famous apples were the Crimson Beauty, Dudley and Peabody Greening, all unheard of today but well known in farm orchards in the 1800s. With the hardy Brunswicker apple in hand, Sharp set about installing orchards all over the Woodstock area on every square foot of soil he could.

As the 19th century progressed Sharp’s apple empire grew at an astonishing rate. In 1887 the total number of fruit trees was a dizzying 250,000 with another 1,600 under experimentation. About 20,000 plum trees grew in country once deemed unfit for apples. The most prolific was named Moors Arctic Plum. Improved by the then unheard-of method of laying the trees level with the ground over the winter, they out-produced anything then on the market. Sweet pears and even
peaches filled the orchards with new types coming at regular intervals. But most impressive of all was an orchard named for his son Franklin, planted with 20,000 high-yielding apple trees on 70 acres.

All this fruit production was responsible for an ever-increasing workforce in Carleton County. Barrels rolled off cooperage works, iron was forged for hoops and more stoneware than anyone could believe was needed. Records of the time show more than 200 men employed with more often needed. Nurserymen were trained to prune and care for the immense orchards and handle countless cuttings. Cider was a drink enjoyed with all meals and Sharp made sure no jug would ever go dry with an immense press specially designed by him.

Apple vinegar was the final product meaning that no apples would be wasted. Sales of various seeds, cuttings and trees added to the accounts as folks went wild for orchards. Train car loads of produce flowed to market, with more than 18,000 barrels leaving Woodstock some years.

As more success came, many organizations asked for Sharp’s increasingly well-known expertise and he offered advice to all—with some careful reservations. According to a note to his daughter, Minnie Bell Sharp, he mentioned that during a talk to a farmer’s organization he carefully left out any knowledge that might have affected prospects for future sales. Sharp was so beloved that citizens in Carleton County petitioned for his knighthood—which he promptly declined.

All triumphs are destined to fall eventually, and so too was all Sharp had done in his beloved Carleton County. Like so many great empires the twin curses fate and bad luck stalked him. A generous, kind man concerned with his neighbours’ welfare, Sharp had no mind for account books. Fortunately the finances for decades were ably handled by his brother-in-law W. S. Shea. With good management skills and access to financing Shea was able to allow Sharp freedom to craft his fruit and plant. After Shea’s untimely death in 1876, Sharp’s oldest son Franklin stepped in and offered his father sound financial advice until he too suddenly died. Trouble now stalked the orchard as disastrous fires destroyed his processing equipment, buildings, nursery and even his home. All the hand-written records Sharp had saved, his grafting notes and findings on biology along with a vast number of volumes he had collected on pomology were ashes. Another blow came when punishing tariffs on the fruit trade were imposed by the McKinley Act on imported fresh fruit, effectively killing the American markets when he desperately needed the income most. Sharp was exhausted and heavily in debt. More difficulties piled on and the pressures of trying to replace many of the older orchards proved impossible. In 1903 Sharp finally laid down his pruning shears and died at the age of 80. His daughter Minnie Bell Sharp and her husband Edwin Tappan Adney attempted to keep the orchards producing but without Sharp at the helm it was soon a lost cause. Sadly, many of his orchards were sold to cover debts then chopped down and pulled up.

Today little exists of this incredible man’s work, his records or even his image. But if you wander a long-forgotten homestead, perhaps some stubborn gnarled apple tree might still hold fast. If luck and season allow you may even find a sweet tasting reminder of the days when the world got its apples from the man named Sharp.

And then there was apple pie…

Apples had been grown in Atlantic Canada by both the early Acadian and New England settlers but little had been done to improve quality or yield. With the commercial success of the New Brunswicker and Crimson Beauty, Sharp was able to concentrate on a series of apples able to offer produce for as much of the year as possible. Early apples like Yellow Transparent (inset) or the Wagner provided fresh pies at haying time. Late season types such as the Bethel could hang on well into October right on the limb. Long storage varieties were especially important allowing apples in barrels to rest secure in root cellars often until springtime. Even the practice of putting up dried apples, one our great-grandparents knew well, was improved upon with the long-forgotten Pound Sweet apple. Every home along the Upper St John River would have the attic hanging with rings of Pound Sweet apples threaded into circles resembling a wreath.

Mentioned in Ruth Grant’s book Now And Then, these tough dried apples needed extra-long soaking before baking into the famous (or infamous, as some claimed) dried apple pies that provided fruit through winter. Another popular treat was to fry softened apple rings in pork fat and then drizzle them with black strap molasses. 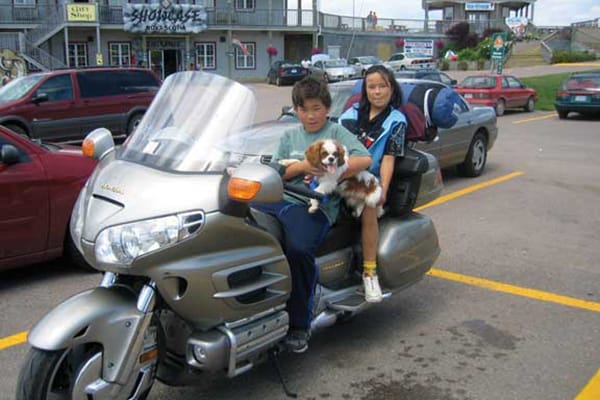 It's the time of year when our olfactory senses kick in, big time. After the grey, lingering winter the trees stretch and bud, and nature offers reassuring, reawakening scents-the muddy smell of the... 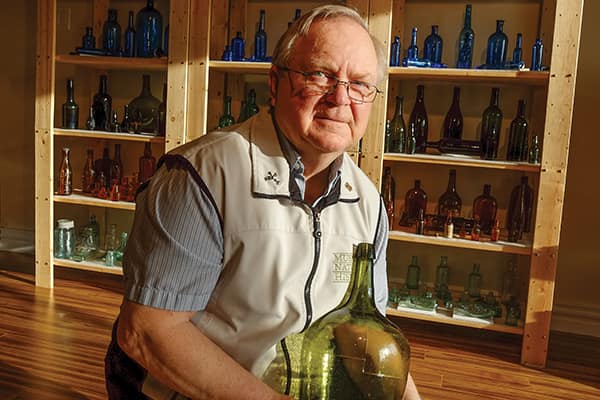 Bottles, bottles everywhere and not a drop to drink... in any of them. Bottles line bookshelves and fill cabinets. They range from large to tiny, from plain to decorative, from amber to blue to...