Once you’ve had locally grown garlic, you’ll never want anything else

I’m standing in a field of raised garden beds that are planted with what French physician and writer Henri LeClerc referred to as “the stinking rose.” Everywhere, tall, straight, rich green stems reach towards the warmth of an Annapolis Valley summer day. The air is redolent with the fragrance of the crop of…garlic. Yes, garlic, not roses. Garlic grows well here. Very, very well. And you can grow your own in your backyard garden.

A gourmet’s delight, a chef’s essential

The owners of all this garlic largesse are Jim Smith and Norm Plant, although Norm is quick to say that despite his surname, he’s the cook and grass cutter of the couple, and Jim is the gardener. They moved to Upper Granville 25 years ago, intending to live a simpler life far from their former work and career lives. They quickly found their niche, establishing their business, Treasures and Collectibles, which they still operate. They also planted three acres of gardens, featuring fruit trees, flowering shrubs, and an assortment of perennials. A few years after settling on their farm, friends introduced them to the joys of garlic growing and gave them a few pounds of seed garlic. Norm says, “With garlic, each individual clove might yield a bulb of four to six garlic cloves, so it doesn’t take long to see your supply grow from year to year.”

Today, Jim and Norm grow four or five of their favourite varieties in five plots, and now harvest about 1,800 bulbs of garlic every year. Jim does pickles and preserves and uses plenty of garlic in those processes, and Norm goes through many pounds of it in meal preparation in their day-to-day lives. They can’t eat all of it, so Norm says, “once our seed-garlic is segregated, the rest gets sold through our business; every year we have lists of names in our ‘garlic-call’ file.”

Anyone who grows garlic for themselves, or purchases it from local growers, will tell you that its flavour is infinitely superior to the imported, treated and bland product found at grocery stores. More and more farmers are growing modest amounts and selling the scapes (the flowering stems which are removed before blooming so the plant will form bulbs) and bulbs of fresh garlic at markets and local produce stands. Once you’ve used local garlic, you’re hooked for life. Norm says “The taste alone of our garlic inspires people to plant their own, which we support wholeheartedly.” He’d love to see more abandoned farm fields turned into garlic producing areas, since it grows so well here.

Aaron Roulston and Sandy Hill operate Brier Dean Estate farm in Sheffield Mills, NS. They began growing garlic in 1997 for personal use, but as Sandy says with amusement, “It quickly became an obsession for Aaron.” They have about an acre of garlic planted—with somewhere around 40 different varieties—which yields about 1500 pounds because they don’t do high-density planting. They sell at a local meat shop in Canning, but also have been going to the annual Avondale Sky Winery garlic festival since 2009.

APart of the attraction—or obsession—of growing garlic is the dramatic differences between varieties. There are early- and late-harvested varieties, softnecked and hardnecked types, some that are pristine white and others that have colourful skins, and there really is a range of flavour. Sandy says, “One of the mildest of garlics is ‘Elephant,’ a surprise to some people because they think that with big size comes big flavour, but that’s not the case.” The couple grow one extremely hot variety that they call ‘Afghan White,’ which originated in the Pakistan Hunza River Valley and is always the first to sell out at the garlic festival. Sandy’s favourite hardneck garlic is ‘Marino,’ an aesthetically-pleasing variety with deep purple stripes on the bulbs, it has a bold flavour and is easy to peel. She likes the soft neck ‘French Thermadrone’ for its medium flavour and its ease of braiding.

Every year Aaron plants more garlic than the previous year, as demand for fresh local product grows right along with his pleasure in increasing his yield. Last autumn was a great planting season as cold weather didn’t come until late November, so he kept going until the ground froze and he could stop raiding Sandy’s personal stash of cooking garlic. She says, “I actually ran out of our garlic this winter, and my sister visited to bring me some of hers!” This year’s harvest should not only yield enough seed and cooking supplies for their family, and plenty for this year’s garlic festival, September 16 at Avondale Sky Winery.

Grow your own starting this fall

Begin with fresh bulbs or cloves. Use locally grown garlic, or purchase seed from a reputable source online. Many local producers offer seed garlic for sale in late summer and fall, which you can find at farmers markets or events like the Avondale Sky garlic festival. Don’t try using garlic purchased in a grocery store, which often has been treated with growth inhibitors to prevent it from sprouting. You may or may not see garlic offered by variety name, but much of what is grown locally is hardnecked as opposed to the softnecked usually sold in large grocery stores. Hard-necked varieties do very well in Atlantic Canada, plus, you get scapes!

Prepare your planting area. Garlic prefers a loose, well-draining but moist soil, rich in organic matter and located in a very sunny spot. If your soil has a lot of clay in it, amend it with plenty of compost to help improve drainage; if it is sandy, organic material will help it hold moisture. If you have plenty of garden area for your garlic, allow six to eight inches distance between each clove. You can plant closer together which will give you more bulbs but they’ll be smaller in size.

Plant in the autumn. Although you can plant in early spring, fall planting yields a crop earlier in the summer. You want to make sure that the bulbs have time to develop roots but you don’t want the tops sprouting through the ground before spring. Jim Smith plants his Upper Granville plots the week of November 11 (that way, he will always “remember” when it’s time to plant) and says if you are planning to use garlic purchased from someone locally, “plant the best and eat the rest.” Break the bulbs apart into cloves (if they aren’t already separated) and plant the biggest ones at least 2 inches deep, saving the smaller bulbs for enjoying in cooking.

To mulch or not to mulch, that is the question. Most growers mulch their garlic to help conserve moisture, moderate soil temperatures, and reduce weed growth. It does take time to apply, and if you have to purchase it can be expensive if you’re doing a lot of planting. Straw is a popular choice for mulching gardens, but Jim Smith collects bags of leaves every fall from neighbours who have raked up their yards—“I’m cheap. They’re free,” he explains—and places them beside the garden to mellow and break down over winter, then mulches his plots with them in the spring. That way, they’ve begun to decompose and will not mat down into an impenetrable barrier. Some gardeners will put several inches straw over their garlic in the fall to protect it from winter temperature fluctuations, but you have to remember to pull it back in the spring so as to give the emerging shoots lots of light.

Eat the scapes. Hardneck garlic varieties produce a distinctive central stalk called a scape that twists into several loops near the top. If left uncut, this will form flowers and later bulbils, which can be eaten or used to produce seed for the future—but leaving the scape and bulbils on will reduce the size of the bulbs you’ll harvest. Most producers will remove the scapes in late June to early July, and these are often for sale at farm markets (or if you’re lucky, a friend will share the scape harvest with you. Scapes are delicious—subtler in flavour than the garlic cloves—and can be used in stir fries, casseroles, grilled... pretty much anywhere you want garlic flavour. I make garlic scape and basil pesto, which reduced the requirement for huge amounts of basil, but you can also simply purée the scapes and freeze them in ice cube trays (use cheap trays that you won’t use for making ice) then store in a sealed container in your freezer. Thaw cubes out to add to soups, pasta, or other dishes.

Harvesting and curing. When the lowest three to five leaves on your plants have turned brown, it’s time to harvest. Pick a warm, dry day when it hasn’t rained for several days so the soil isn’t wet and carefully, as you would when digging potatoes, dig around the plants and lift the stalks out of the ground. Your harvest will need to be cured for several weeks, which you can do either by spreading your stalks out on a screened shelf or table, or bunching up to a dozen stalks together and hanging them in a dark, dry, and well-ventilated location. Once the entire stalk is brown and the bulb is covered with several papery layers of skin, your garlic is ready to use.

As I was leaving Jim and Norm’s farm, Jim handed me a piece of paper with one of his favourite sayings on it: 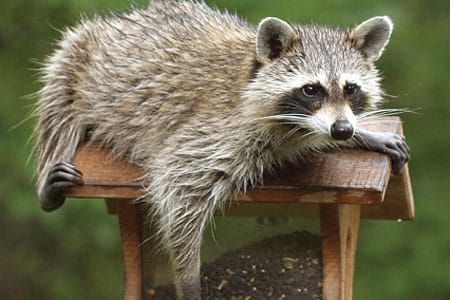 Bird feeders are a common target for raccoons—known for their manual dexterity. They also use their front paws to “see” food, softening the skin’s dense nerve meshes with water. 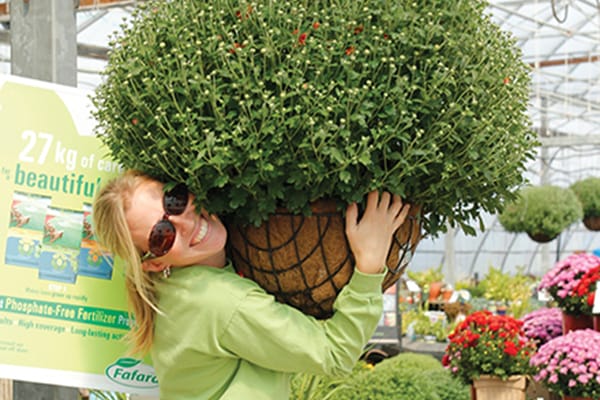 Growing a Green Thumb (Part One)

THERE IS NOT a time I can recall when I didn’t have some interest in gardening. The roots of my obsession began in my grandparents’ homes when I was a small child. My DeLong grandparents had a...