A fleeting but momentous visit with Sable Island’s wild horses

Cold salty wind whipped my cheeks as I struggled to steady my binoculars against the ocean swells, my eyes straining for any sign of an equine. A seal popped up next to the dinghy, its chocolate brown eyes staring curiously at the black rubber beast bobbing there. I scanned the golden sand beach, mist clinging to low bushes as my stomach rolled with the waves. If the fog crept in we wouldn’t be able to land. I’d come so far to see the Sable Island horses; I hoped I wouldn’t fail now.

Almost 300 kilometres offshore from Halifax is a herd of wild horses on a tiny sand spit so remote you need to charter a plane or sail through shark-rich waters to reach it. Lacking funds for a charter flight, I put aside my fear of sharks and aversion to lineups for a 12-day expedition cruise that offered four hours at the Sable Island National Park Reserve. If bad weather forced the captain to cancel our landing I would have a long trip with no horses. It was an expensive gamble, but I took it.

The skinny 42-kilometre-long sand crescent boasts one tree, 500 horses, and fog that cloaks the animals as frequently as the mystery surrounding their origin and ability to survive. For years people wondered where the equines came from (initially thought to be shipwreck survivors, people now believe they were farm animals turned feral) and many ponder how they find enough food in such a harsh environment.

I was travelling on a Russian research vessel leased by One Ocean Expeditions for passenger cruises. As I boarded in Sydney, NS the ship’s photographer took pictures of passengers’ “before” faces. Knowing Sable Island was the ship’s first stop, I had no trouble grinning for the camera.

My cabin was functional, built for hard-working Soviet researchers, not tourists kicking back on vacation. Two single berths nestled perpendicular to each other, a single desk chair, and a loo that doubled as a shower offered basic comforts. But there was a door to keep out the world when I’d had enough togetherness and a window that opened to the ocean.

I scanned the powder-blue sky as we motored towards Sable Island, hoping it remained clear. The shallow water and sandbars in this part of the Atlantic have ensnared more than 350 ships and attracted perhaps the island’s most famous visitor. Alexander Graham Bell visited Sable Island in 1898 searching for friends aboard La Bourgogne (unfortunately they perished when the ship ran aground).

I fell asleep, gently rocked in my berth as the boat chugged offshore towards the continental shelf. I awoke to stillness and bright sunlight sneaking through my porthole. I poked my head out to see a long sandy beach, a haze clinging to grassy dunes—we were anchored near Sable Island. I peered through my binoculars, delighted when a brown lump on the beach moved. It was difficult to see so far away but I was sure it was a horse.

I scrambled into waterproof outwear for the long dinghy ride to shore. There are no docks here, so I was prepared for a wet landing, made more stressful with the knowledge that 18 species of sharks patrol these waters. To relax I peered at the horse-shaped head of a grey seal in the gentle swells peering back at me. Sun glinted off its shiny forehead as other curious pinnipeds thrust through the water’s surface, part of the world’s largest grey seal breeding colony. They felt to me like an aquatic welcoming committee.

Sable Island is Canada’s 43rd national park, established in 2013 to protect the horses and important bird habitat. Visitors need official Parks Canada permission to visit. There are no tourism facilities and camping is not permitted so tourists can stay only for the day. One Ocean Expeditions lands here just three times a year; I was one of only 96 people going ashore on this voyage

As we approached land our expedition leader met our dinghy and outlined the rules. We were to pile our outer gear on the beach while we hiked and to leave nothing behind when we left the island. That included human waste. A temporary outhouse had been erected on the beach a few metres from where our group gathered.

I experienced a new level of rustic comfort as I struggled to use the beach biffy. Another passenger kept the tarp from slapping me in the head in the howling winds while I struggled atop a black plastic barrel, trying not to tip it or myself into the sand. (I swore off fluids for the rest of the day!)

The two Parks Canada employees who live on the island (there are also two meteorologists in residence) greeted us and divided us into groups for hiking. One would spend several hours circling much of the island, others would do a shorter hike, and a few would walk on the harder sand of the beach. Wanting time to just sit quietly on the island, I opted for the second group.

Daniel, a tall, lanky fellow with serious eyes and a crisp, green Parks Canada shirt, gathered our group and suggested we hike to Bald Dune—the highest point on the island—to search for horses. We eagerly followed him away from the beaches and into the deep sand of the dunes.

Soft camel-coloured sand pulled at my feet with every step, the temperature rising as we moved away from the Atlantic’s cool waters. We stopped to examine a skeleton half-buried by shifting sands and, a few metres away, some horse poo. We stared at it as if we could conjure up the horse it came from, so desperate were we to see a wild horse.

As we trudged up the 30-metre-high dune, cool winds hurled sand in our faces. My arms stung from tiny particles blasted over the dune and I wondered how horses coped in this dusty misery.

Cresting the hill, teal-blue waters of the Atlantic visible beyond green meadows, I spotted several small clusters of horses marching in a never-ending search for food. We descended into a small valley where several mares and their foals grazed. A cinnamon-coloured horse lifted her head at our approach but didn’t seem bothered.

The sunshine highlighted ribs on her angular body, hipbones jutted skywards, and her mane was knotted and ragged, rippling in the breeze. She might not have won a horse show, but she was beautiful in her tatty dignity. A tawny foal stood nearby, watching its mother for a signal to run. I was tempted to creep closer, but Daniel reminded us to keep 20 metres away.

I sank into the grass, taking shelter behind scrubby bushes as I opened my sandwich, chewing slowly as I watched several mares and their babies graze on marram grass and beach pea. I suspected sand might be part of their diet as I wiped grit from my bread.

Two foals chased each other around the bushes. It was a carefree moment but I knew their biggest challenge was ahead. Surviving their first winter would require strength and sufficient feed. I thought of the bleached bones seen earlier and hoped these beautiful creatures didn’t face an early demise.

Parks Canada lets the carrying capacity of the island determine the size of the equine population, not interfering with the natural cycles that have been repeating since the horses first appeared more than 250 years ago. Parks Canada’s Tony Loring would tell me later: “The horses are part of the island’s ecological community and as such are protected as wildlife by Parks Canada under the Canada National Parks Act and the National Parks of Canada Wildlife Regulations. Parks Canada does not consider the Sable Island horses to be domestic animals, which live and breed in tame conditions and depend on humankind for survival.”

To my delight the mare and her herd ambled towards our group. I gazed into her amber-coloured eyes; her head held low and relaxed like my own horse when she heads to the barn. But this horse would never know human contact.

As tempting as it was to get closer we fell back, letting the parade of wild horses pass. Having never experienced hardship from people, they were unafraid. I marveled at their ability to survive in a harsh environment they never chose and will never leave (The Canadian Shipping Act banned the removal of horses from Sable Island in 1961).

Daniel reminded us our time with the horses was ending. I briefly considered stowing away on the island but realized my odds of survival were grimmer than that of the horses.

I trudged back to the beach, placing my feet overtop hoof prints on the sand to keep my connection to these tough little animals as long as possible.

I looked back over my shoulder for one last look at a gangly, nutmeg-coloured stallion trudging across the sun-bleached sand. He looked up, his eyes glowing with an understanding of this rugged landscape. Imprinting his image on my mind I headed back to the ship and another week of buffet lineups and crowded rooms. The gamble had been worth it. 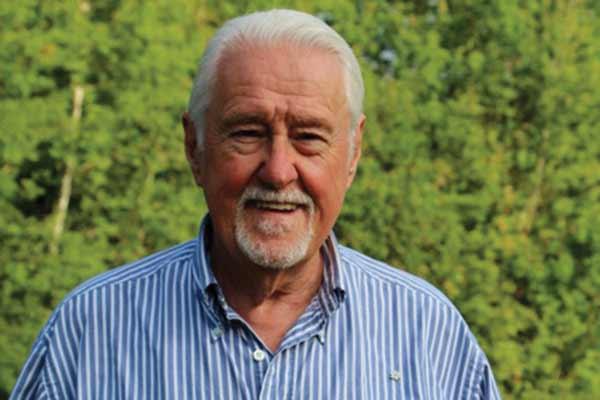 Years ago I was in Dublin, Ireland. One Sunday, having no particular plans for the day, I went to Connolly Station on Amiens Street and bought a ticket to go on what Córas Iompair Éirann (Ireland’s... 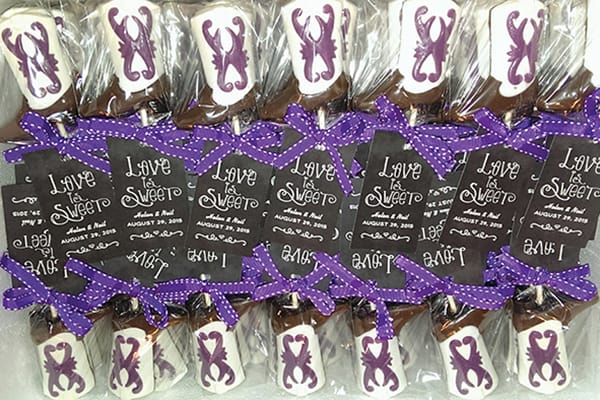 When Helen and Neil Morley of Ardoise, NS, are asked what the theme of their August 2015 wedding was, they laugh and say, “Wedding.” 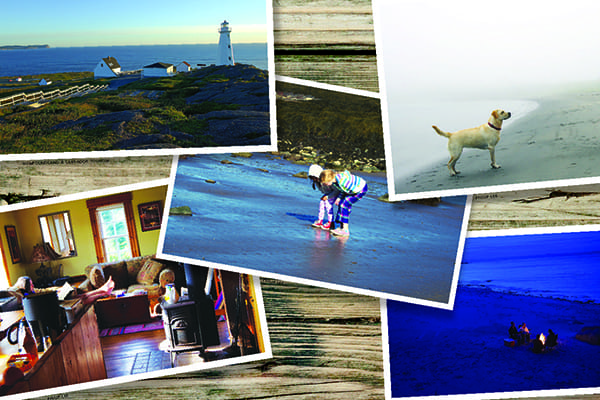 On summer mornings we’d meet in a place we called the Purple Passion, a middle-of-nowhere bridge that crosses the upper Kennebecasis River near Sussex, NB. We were the only ones who called it that.