After 160 performances of his walking tour entitled Fleming, playwright and actor Paul Rowe, looks back with great and well-deserved satisfaction on his achievement.

“I nailed it. It was good. The piece I wrote has stood the test of time.”

Paul fondly recalls how it all came about. “Pat Thompson, chair of the Basilica Heritage Foundation, approached me about writing a play wrapped around Bishop Fleming and the construction, completion and consecration of the Basilica Cathedral over 165 years ago. The play was to be presented as a walking tour.”

It was a natural thing for Paul to do. The politics of pre-Confederation Newfoundland always fascinated him. That interest led him to several writing and acting opportunities. He had written a play for Rising Tide Theatre on Sir William Coaker, the founder of the Fisherman’s Protective Union in the early 1900s. Soon afterwards he was commissioned to write a play for the historic town of Placentia, the unofficial French capital of Newfoundland.

“Pat Thompson is a businessman.” continues Paul. “He is also a man who sees the power of the arts. He saw that a play like this would be a great opportunity for fundraising and bring awareness to the heritage of the Basilica.”

So, Paul Rowe dug in and faithfully did his research.

Bishop Fleming left behind a great collection of letters. That, combined with the dramatic and turbulent history of the time, gave Rowe a lot of interesting stories to work with. In the early to mid-1800s the makeup of Newfoundland was changing. Slowly but surely, it was shedding its migratory fishing mantle for one of a more permanent nature.

The more research Paul did the more he came across riveting and colourful stories. Like the one about how Bishop Fleming obtained the land on which the Basilica now stands. The property was owned by the British military and any attempts to buy or barter were always met with strong opposition. Formal requests were simply passed over by the government; a government which clearly showed its anti-Catholic bias. So Bishop Fleming decided to go to the top. That meant sailing to England to try and meet with the new English monarch, Queen Victoria.

One notable trait of Bishop Fleming was that he was unorthodox. That amply showed in how he planned to approach the Queen. He was told that she often passed by the Speaker’s Corner in Hyde Park, London. On a cold, wet, rainy day he went there and waited. When her carriage came by, he stood out. Surprisingly, she stopped and let him in her carriage. He explained the vision he had for his church and the need to acquire the land on which it was to be built. After they parted, Queen Victoria cut through the red tape and arranged to have the land passed over to Bishop Fleming and the Catholic community of St. John’s. She also gave him her shawl to keep him from getting more soaked than he already was.

That story also reveals his determination, along with his natural ability to get people to buy into his many plans for the ever expanding Catholic population of Newfoundland.

Paul observes, “He had a tremendous personality but the thing that struck me most about him was his capacity to inspire people to do tremendous amounts of work. Notably, Bishop Fleming ignored the opposition. He had many things laid against him but it was like he didn’t even see those things. He just forged ahead.”

This was also a time in Newfoundland’s history when there was a deep divide between Protestants and Catholics. This also applied to the legislature where so many seats were set aside for each sect with the Catholic members having less representation. It was this built in prejudice that set him up as a frequent target for anti-Catholic attacks.

Criticism of Bishop Fleming was often fierce and sometimes violent. Like the true story of Henry Winton, editor of the local Public Ledger newspaper and who was a constant detractor of Bishop Fleming. He saw the Bishop as the enemy and at every opportunity set out to antagonize him. As a result, Winton was greatly hated in the Catholic community. One day, in broad daylight, he was attacked by a group of masked men who cut off his ears. It was a horrific act which also demonstrated how powerful feelings could get between the two Christian factions. It also showed what Bishop Fleming was up against.

Despite the antagonism that often existed between Catholics and Protestants, somehow Bishop Fleming was able to rally people from both faiths to help him realize his dream. A good example is how he personally oversaw the extraction and delivery of granite from the quarry on Kelly’s Island in nearby Conception Bay. To get the stone from there to the waterfront in St. John’s, he talked many non-Catholic schooner captains in the area into delivering the granite cargo—for free. He also persuaded many members of various organizations such as the stonemasons, labourers and carpenter societies to give one day a week to help move the stone from the wharves up to the site where the Basilica now stands. Even members of a women’s organization put aside one day a week to help bring stone up the long, steep hills of St. John’s.

Of course, there was always need for money. In May, 1841 when the cornerstone was laid, an estimated crowd of 20,000 people showed up for the ceremony. Once the stone was put in place, a well to do businessman by the name of Lawrence O’Brien came forward and placed 250 pounds on the corner stone. That prompted others to come forward with donations. By the end of the day the enormous sum of 2,300 British pounds—worth more than 347,000 of today’s dollars—was collected.

This particular event not only highlighted the magnetism of Bishop Fleming and his vision but it also underpinned the dream he held in his heart and mind. He had plans for orphanages, convents and schools, all of which were in great need at the time.

To make his future, wide reaching plans more of a reality he returned to his native Ireland. There he persuaded the superiors of two great teaching orders to come to Newfoundland. The Presentation Sisters and The Sisters of Mercy came to this young evolving country of Newfoundland and contributed greatly to the education and moral upbringing of its residents. While Bishop Fleming was the driving force behind all of these ventures, his crowning glory was the construction of the Basilica of St. John the Baptist.

“In some respects, Bishop Fleming reflected the times in Newfoundland,” says playwright Paul Rowe. “The penal laws were lifted in 1829. The face of Newfoundland was changing. A merchant class grew alongside a group of people known as planters. These new, evolving classes of society were thriving in many of the coves around Newfoundland. In the capital a growing segment of professionals was developing—teachers, lawyers, journalists, doctors, blacksmiths and the like. Many of these people never caught a codfish in their life.”

No doubt Bishop Fleming was a visionary. But there’s one thing to envision a project, putting it into action is quite another. When the granite cornerstone was laid it represented a cornerstone of co-operation between two Christian sects that most often didn’t see eye to eye.

When the Basilica was finally completed with the help from both Catholics and Protestants, it was the largest cathedral in all of North America. It was said to inspire the visiting Archbishop of New York to return to his city and begin planning for the now famous New York landmark, St. Patrick’s Cathedral.

And, of course, it was a strong matter of pride for all Newfoundlanders, Catholic and Protestant alike.

The final words in Paul Rowe’s play are those of Bishop Fleming, who spoke as the structure neared completion.

“My friends, a Cathedral such as this might be said to represent many things. It is more than anything, a monument to the piety, the strength and the vigour of the people of Newfoundland.

“Yet for all its awesome splendour, it is a simple thing too. It is a message, like a message in a bottle, cast upon the eternal seas of time, saying to the people of a future day that we who built this place were here, we lived, loved and served each other and our God in this place as best we could.”

Quite a legacy, and quite a tour. 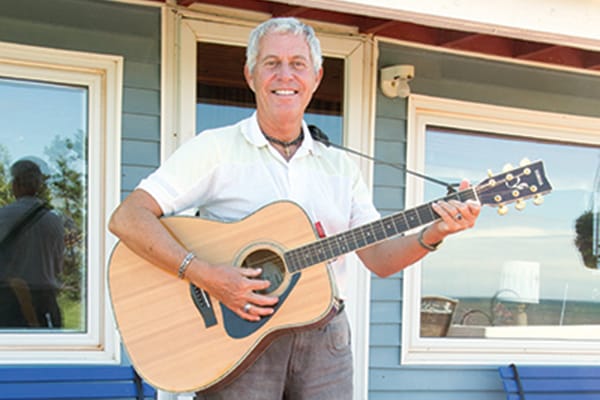 Born and raised in Saint Chrysostome, in southwestern PEI, Father Éloi Arsenault trained as a priest in Quebec before returning home and being ordained at his local church in 1970 on August 15—the...

For love, not money

It’s not just acquiring old stuff, it’s the thrill of the hunt